Nor Lines history is characterized by more than 160 years of scheduled maritime transport, and it is now entering a new era where it sets new environmental standard with two natural gas-powered newbuilding put into service in 2015.

The names of newbuildings, “White Bear” and “White-Beaked Dolphin” is strong Norwegian name for animals that live in and depend on the sea and the environment there. They are easily recognizable, and explicable in other languages.

Animal species are illustrated on the ships hull and superstructure, along with the company logo and indication of natural gas use. 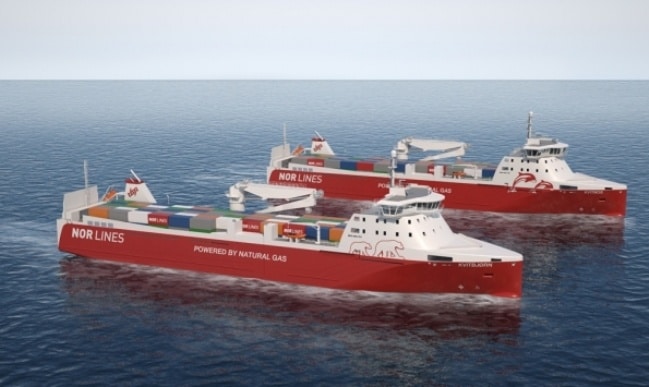 “White” in the name of the ships, referring to the white, inconspicuous and cleaner exhaust that comes with LNG operations. Also higher energy efficiency means significantly less emissions.

Although it is not yet possible to create entirely GHG neutral ships for the type of freight Nor Lines driver, these ships a significant step in the right direction.

Innovator in hull form and propulsion systems, along with natural gas as fuel, resulting in: