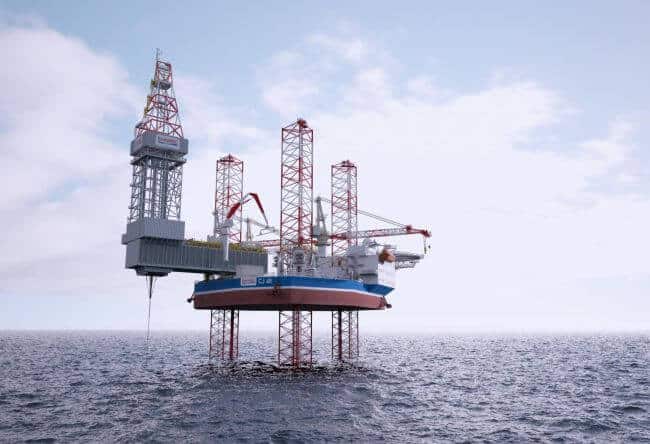 Noble paid $33.75 million of the $93.75 million purchase price in cash, with the remainder of the purchase price, or $60 million seller-financed at a 4.25% interest rate paid in cash and 1.25% paid in kind over the term of the financing. The Company used existing cash balances for the initial payment and the secured seller-financed amount is to be repaid in four years. The Company also has an option for the purchase of a second newbuild CJ46 jackup from PaxOcean.

The newbuild jackup, to be named the Noble Johnny Whitstine, was built at the PaxOcean Graha shipyard in Batam, Indonesia. The robust rig design for moderate environments allows for operations in water depths of up to 375 feet and well depths of 30,000 feet. A modern drilling control system and versatile 70 ft. x 40 ft. envelope cantilever skidding system equipped with two blow out preventers contribute to the rig’s enhanced drilling capabilities.

In connection with the purchase, Noble has entered into a new drilling contract in the Middle East region with a three-year primary term, plus a one-year option, with an expected commencement of early-2019.

Julie J. Robertson, Chairman, President and Chief Executive Officer of Noble Corporation plc, stated, “With our premium jackup rig fleet fully committed through late-2018, and further evidence of rising jackup demand into 2019, we remain focused on growth opportunities that reinforce our competitive position. This attractive acquisition of a proven and highly versatile jackup design will provide us with a near term contract commitment and future opportunities where growing customer demand is evident.”

ReCAAP ISC: Three Armed Robberies Against Ships In Asia Reported In Last One Week
Want to share your tips and advice? Got questions? Visit the community forum to ask questions, get answers, meet people, and share your tips!