Through the use of NOAA’s Physical Oceanographic Real-Time System (PORTS®), super-sized ships coming through the recently expanded Panama Canal can now more safely and efficiently enter the Miami seaport. In addition to the improved vessel safety, past NOAA studies have shown that a PORTS system, like the one dedicated by NOAA and PortMiami officials today, can provide considerable economic benefit to the local community. Already one of the busiest ports in the world, Miami’s harbour supports over a hundred thousand jobs while providing billions to the national economy.

“Through PORTS partnerships, seaports have the opportunity to increase the flow of cargo through their docks without the massive outlays normally associated with port expansion,” said Secretary of Commerce Wilbur Ross. “Thanks to the hard work of NOAA staff and those in the private sector, Miami will not only have a safer harbour but will also see even greater economic growth. These are the types of strategic infrastructure investments we aim to make through the Commerce-led $20 billion ’transformative projects’ program within the President’s infrastructure initiative.” 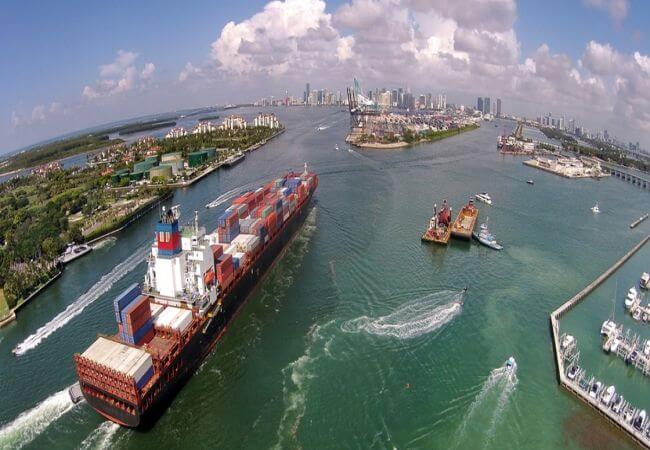 PORTS is a successful public-private partnership that reduces ship accidents by more than 50 percent, increases the number of cargo ships can carry, reduces transit delays for commercial traffic, enhances recreational activities, and improves hazardous spill response. Before the addition of PortMiami, an NOAA analysis estimated as much as a $300 million annual benefit from an expanded PORTS system. Including PortMiami, there are 31 PORTS in the country, supporting 85 percent of the nation’s cargo by tonnage.

The PORTS model is in the same mold as the “transformative” proposals put forth in President Trump’s infrastructure initiative, in which Federal assistance will be leveraged to spur local development. The President’s proposal will return infrastructure decision-making to States and localities, allowing them to invest in the specific needs of their communities

Representing a new opportunity for economic growth, larger cargo ships are transiting the Panama Canal each year, carrying millions of tons of goods. The New Panamax class is capable of holding twice the amount of cargo as those using the canal before it was widened.

“Ship sizes are pushing the limits of seaport infrastructure, and vessel operators need better information to make safe navigation decisions,” said retired Navy Rear Adm. Tim Gallaudet, Ph.D., assistant secretary of commerce for oceans and atmosphere and acting undersecretary of commerce for oceans and atmosphere, who attended the ceremony. “By participating in PORTS, PortMiami is making an investment in a safer seaport and more robust shipping economy.”

The meters will provide ship operators with critical real-time information on currents that can help them better plan their transit and prevent accidents in and around the port. In Miami, strong currents from the Gulf Stream run perpendicular to the shipping channel. The current meters give vessel pilots the accurate, real-time data they need to make navigation decisions to direct the larger ships into port.

“The partnership between NOAA and PortMiami enhances our seaport’s advantages,” said Miami-Dade County Mayor Carlos A. Giménez. “The new real-time technology provides critical information for the industry’s big ships. It represents a fast, efficient, and safe entry into Miami’s channel, allowing more vessels to pass through benefiting our local economy.”