July 15, 1942. America had been in World War II for less than a year, but the fight was coming to the nation’s shores. That day, off Cape Hatteras, North Carolina, the German U-boat U-576 sank the Nicaraguan-flagged freighter SS Bluefields. But it came at a steep price – the merchant ship convoy and its U.S. military escorts fought back, sinking the U-boat within minutes as U.S. Navy air cover bombed the sub while the merchant ship Unicoi attacked it with its deck gun.

NOAA and its partners will visit what remains of the two ships, documenting World War II’s “Battle of the Atlantic,” which pitted U-boats of the German navy against combined Canadian, British, and American forces defending Allied merchant ships.

Using manned submersibles, the researchers will collect data to visualize and virtually recreate an underwater battlefield that has remained undisturbed for 74 years. Project Baselineoffsite link, a global conservation non-profit, is supplying the GlobalSubDive assets including the research vessel Baseline Explorer, and two manned submersibles. 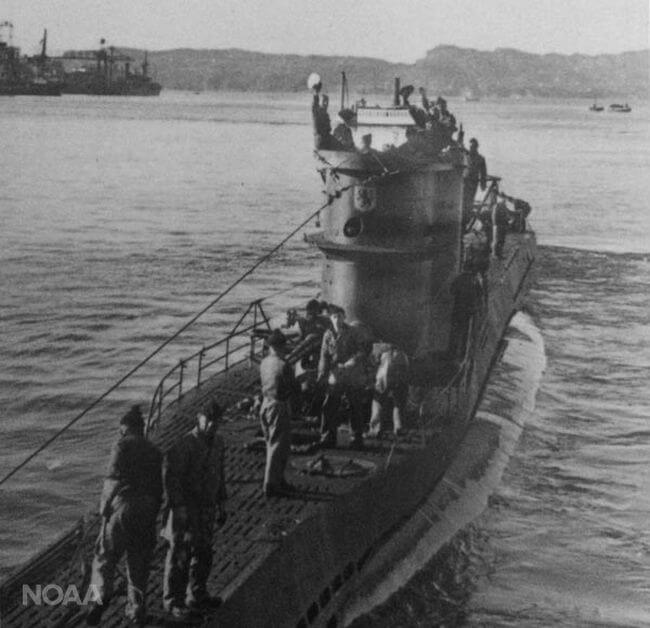 “This discovery is the only known location in U.S. waters that contains archaeologically preserved remains of a convoy battle where both sides are so close together,” said Joe Hoyt, Monitor National Marine Sanctuary archaeologist and chief scientist for the expedition. “By studying this site for the first time, we hope to learn more about the battle, as well as the natural habitats surrounding the shipwrecks.”

The expedition, which runs through September 6, builds on previous work by NOAA and its partners to document nationally significant shipwrecks in the “Graveyard of the Atlantic” off North Carolina’s Outer Banks. During the expedition, NOAA will also visit several other World War I, World War II and Civil War vessels including the USS Monitor.

NOAA is currently considering an expansion of Monitor National Marine Sanctuary’s boundaries to increase the protections to the Bluefields, U-576 and other historic shipwrecks. Although the crew of Bluefields evacuated and did not suffer any casualties, the site is a war grave for the crew of U-576.

“The significance of these sites cannot be overstated,” said David Alberg, superintendent of Monitor National Marine Sanctuary. “This area off North Carolina is the best representation of a WW II battlefield off the East coast. Now, working with our partners, we have an opportunity to study it, characterize it, and, like other historic battlefields in this country, hopefully protect it.”

Additional funding to support the mission was provided through a grant from NOAA’s Office of Ocean Exploration and Research and the Bureau of Ocean Energy Management.