Human activity increases the amount of nitrogen that reaches the oceans by 50%, on top of natural processes, according to a new report which assesses the magnitude and impacts of anthropogenic atmospheric nitrogen inputs to the ocean.

The study by the Joint Group of Experts on the Scientific Aspects of Marine Environmental Protection (GESAMP), a United Nations advisory body, provides a new estimate of the extent that human beings are altering the cycling of nitrogen in the oceans. Extra nitrogen is reaching the oceans through rain or dust fall, as a result of fossil fuel burning and intensive agriculture. 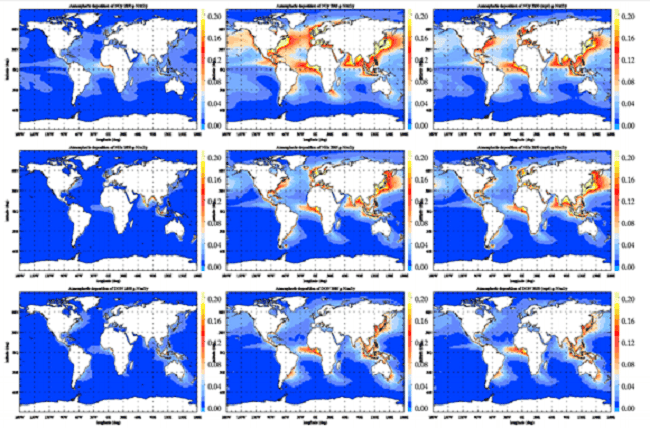 The natural process of nitrogen fixation is essential for life. Inert nitrogen gas in the earth’s atmosphere dissolves in the ocean, where it is converted into reactive nitrogen forms used by living marine organisms as nutrients for growth and development.

However, too much extra nitrogen in particular ocean areas can cause problems such as algal blooms and the release of the greenhouse gas nitrous oxide.

The atmospheric input of reactive forms of nitrogen to the ocean is now estimated to be almost four times that in 1850. In areas of high emissions to the atmosphere, such as in Southeast Asia, Europe and North America, human-induced increases in reactive nitrogen deposition to the ocean are proportionately higher.

The report suggests that current human nitrogen emissions may remain relatively stable on a global basis through 2050, but more research is needed, particularly in the Northwest Pacific and Northern Indian Ocean. These are areas of the oceans that currently receive high inputs of atmospheric nitrogen and where there are also likely to be substantial changes in the future, with potential impacts at regional and global scales. Areas of the Mediterranean and North Atlantic are also candidates for further research, due to the particular nature of the additional nitrogen deposition in those areas, influenced by different levels of phosphorus and iron.