The Stena Immaculate, the ninth of a total of 13 IMOIIMAX MR tankers, was named today, 10 January 2017. The vessel is owned by Stena Bulk and her godmother was Katarina Ljungqvist, Head of Handelsbanken Western Sweden. The solemn naming ceremony was held at the shipyard GSI (Guangzhou Shipbuilding International) in Guangzhou from where the vessel will be delivered within the next few days.

A large number of guests, from both corporate management and partners as well as representatives of the shipyard had gathered on the quayside to attend the naming ceremony. The ceremony began with traditional Chinese dance and music before godmother Katarina Ljungqvist swung the bottle of champagne against the tanker’s bows and wished the vessel, her captain and his crew fortune and prosperity on the seven seas. 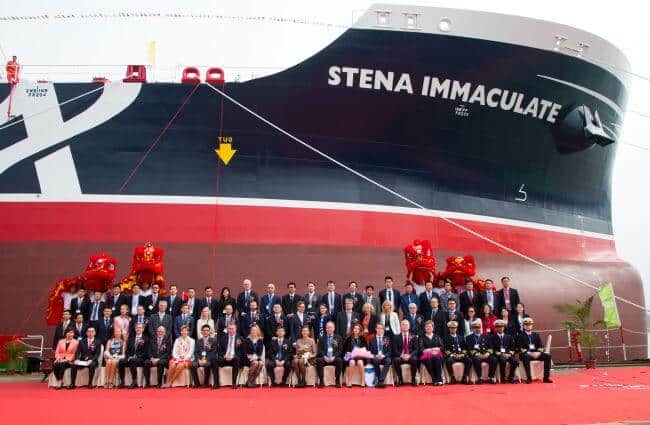 The Stena Immaculate’s captain, Sachin Salunkhe, then showed the guests around the newly built vessel. On her maiden voyage, with a cargo including vegetable oils, she will sail from Papua New Guinea to Europe.

“Almost exactly two years have passed since the delivery of our first IMOIIMAX tanker and the vessels are continuing to perform beyond our expectations. The concept has set a new standard for both cargo efficiency and bunkers consumption. With number nine of the13 vessels on order soon out on the market, this tanker will be yet another addition to our high-quality fleet. We would also like to take the opportunity to thank the shipyard GSI for fantastic collaboration during both the
technological development and construction”, said Erik Hånell, President & CEO, Stena Bulk.

The chemical and product tanker has a length of 183 metres, a beam of 32 metres and a deadweight of 50,000 tons. IMOIIMAX is a further development of an already well-established concept and the innovative technical design was developed by Stena Teknik together with the Chinese shipyard GSI.

It offers several advantages such as extra large cargo flexibility, a high level of safety and economical fuel consumption – 10-20% lower than that of equivalent vessels when sailing at service speed.

All the IMOIIMAX tankers will be included in a fleet operated by Stena Weco and will sail in the company’s global logistics system, which currently employs more than 60 vessels.

The delivery of the tenth IMOIIMAX tanker, the Stena Impeccable, is expected to take place in March 2017. The remaining three vessels will be delivered by 2018. Five of the 13 IMOIIMAX tankers are wholly owned by Stena Bulk, four together with GAR (Golden Agri Resources), two by Stena Bulk’s sister company Concordia Maritime and two by Stena Weco.