You are here: Home › Shipping News › Nigerian Pirates Kidnap 35 Seafarers In The Gulf Of Guinea in 2018 – Report
TwitterFacebookLinkedInPinterestBuffer

Nigeria continues to be the World’s epicentre for piracy activity.From January through June 2018, EOS recorded 34 Nigerian pirate attacks on merchant and fishing vessels in the Gulf of Guinea. These attacks resulted in the kidnap of 35 seafarers for ransom and the hijacking of several vessels.

“Most concerning this year has been the resurgence of ‘petro-piracy’, involving the hijacking of tankers for oil theft” said Jake Longworth, senior intelligence analyst at EOS Risk. “The return of petro-piracy has been accompanied by an associated increase in the geographical reach of Nigerian pirate gangs, leading to attacks in the waters of Benin and Ghana.” 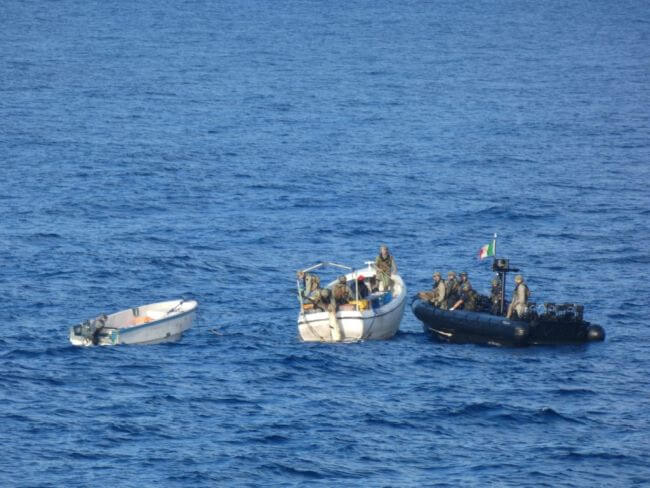 Following a flatlining in piracy activity off Benin since 2012, EOSrecorded 7 pirate attacks in the waters of Nigeria’s western neighbour in the first half of 2018. The attacks involved several successful tanker hijackings, one of which resulted in the loss of 2,000 MT of product. Nigerian pirates also operated in Ghanaian waters in April, kidnapping five seafarers from two vessels.

Despite hijackings grabbing the headlines, Longworth says that the main threat is still found off the restive Niger Delta, specifically on the approaches to ports and oil terminals in the vicinity of Port Harcourt. “95% of attacks we recorded in Nigerian waters occurred near Bonny Island, within 60 nautical miles of the shore. Pirates operating in these waters are focussed on the kidnap of seafarers for ransom.”
It was in this area that heavily armed Nigerian pirates kidnapped 11 seafarers from the Dutch general cargo vessel FWN Rapide in April. According to EOS, it is the highest number of hostages taken by a Nigerian pirate group in a single attack.

Steven Harwood, head of special risks at EOS, which covers kidnap for ransom response, says there are two main pirate gangs in Nigeria, both employing around 16 full time pirates. “One is located in the creeks near Yenagoa, Bayelsa State and the other around Abonnema, RiversState. Both gangs are in communication and sometimes subcontract the physical hostage taking to other criminal groups”.

EOS warns that instability in the Niger Delta is likely to increase in the run up to Nigeria’s 2019
general elections, which could result in a spike in piracy activity. “Since the turn of the century, this pattern has been visible in Nigeria ahead of major election periods, evidence of the complex links between piracy and political conflict in the Niger Delta.”

To mitigate the risk, EOS recommends Masters implement Global Counter Piracy Guidance (GCPG) measures and familiarise themselves with the ‘Guidelines for Owners, Operators and Masters for protection against piracyin the Gulf of Guinea region – version 3, June 2018’. Where additional protection is required, they say shipping companies may require armed escort vessels and embarked guards where domestic law permits.

Irving Oil Offers Low-Sulphur Fuels On Both Sides Of The Atlantic
Want to share your tips and advice? Got questions? Visit the community forum to ask questions, get answers, meet people, and share your tips!