The Floating Storage and Offloading (FSO) tanker J. NAT is currently being towed towards the infamous shipbreaking beach of Chattogram. The vessel, formerly known as JESSLYN NATUNA, operated in the Natuna gas field and was owned by Indonesian company Global Niaga Bersama PT. It was recently sold to cash buyer SOMAP International, who re-named it to J. NAT and re-flagged it to Palau. SOMAP is a company specialised in trading end-of-life vessels to the beaching yards.

The FSO J. NAT left Indonesian waters on 18 April even though local activists warned Indonesian authorities about the toxicity of the vessel. Official documents indicate that the tanker has more than 1500 tons of hazardous waste from the oil extraction process onboard, including 1000 tons of slop oil, 500 tons of oily water and 60 tons of sludge oil contaminated with high concentration of mercury. The J. NAT likely also contains high amounts of mercury in its structures, as well as in ballast waters. 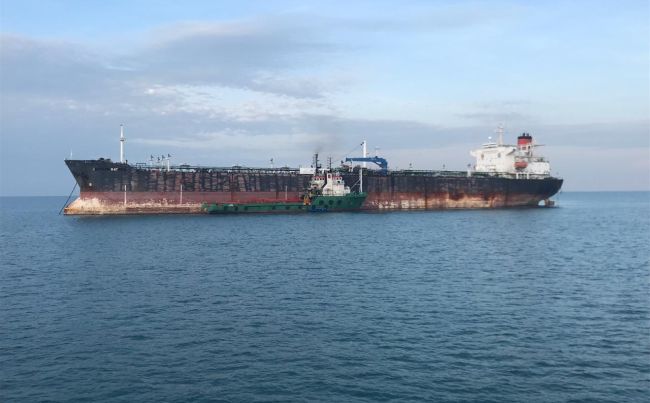 “In addition to the hazardous materials typically found on conventional ships, oil and gas structures, such as the J. NAT, are often contaminated by mercury. Mercury is a naturally occurring element present in virtually all oil and gas fields. Concentrations are especially high in the South American and East Asian regions.”
Ingvild Jenssen – Executive Director and Founder – NGO Shipbreaking Platform

Given the likely high concentrations of mercury in the steel hull of the FSO J. NAT and the blow torch method used to cut vessels, there is a high risk of inhalation of mercury vapour. Mercury is an extremely toxic metal. Exposure to mercury, even at low levels, has been linked to central nervous system damage, kidney and liver impairment, reproductive and developmental disorders, defects in foetuses and learning deficits.

In a recent court judgment on the illegal import of another oil and gas unit – Maersk’s FPSO NORTH SEA PRODUCER – the Bangladesh Supreme Court denounced the fraudulent documents claiming that the vessel was toxic-free when it in fact was contaminated by radioactive substances. The Court called for full transparency on the hazardous materials onboard end-of-life vessels imported to Bangladesh.

“In light of the recent judgment on the North Sea Producer, there is no scope to give any authorization for import, beaching, and breaking of the J. NAT. It is public knowledge that Bangladesh will not be able to deal with the hazardous waste flow downstream. The vessel will simply flood our shores with toxic substances and expose our workers to deadly risks.”
Syeda Rizwana Hasan – Supreme Court lawyer and Director of Bangladesh Environmental Lawyers Association

The Platform has documented drill ships, floating platforms, jack-up rigs and FPSOs/FSOs scrapped in recent years. Many were beached in South Asia, including units owned by Diamond Offshore, Maersk, Odebrecht, SAIPEM, SBM Offshore and Transocean. The J. NAT case resembles the recent export from Indonesia to the Indian beach of Alang of SBM’s mercury-laden tanker YETAGUN, which was investigated by Dutch media Zembla.

“With many units to be decommissioned in the next few years, it is high time that the oil and gas industry collectively seeks sustainable solutions for the recycling of its floating units. All actors involved in the oil and gas supply chain, directly or indirectly, have the responsibility to not cause harm to workers and the environment in developing countries.”
Ingvild Jenssen – Executive Director and Founder – NGO Shipbreaking Platform

[1] Bangladesh and Indonesia are both signatories to the Basel Convention on the Control of Transboundary Movements of Hazardous Waste and their Disposal. Under this Convention, the trade in mercury and several other hazardous wastes that are likely contained within the structure of the FSO J. NAT is strictly controlled. The import of the vessel requires that there is prior informed consent (PIC) between Indonesian and Bangladeshi authorities and that the declarations of hazardous materials left on board must reflect actual conditions. Moreover, the Convention requires that no export be made if there is reason to believe that the recycling or waste management facilities employed for the materials will not constitute environmentally sound management under the Convention. The shipbreaking yards that operate on the tidal beach of Chattogram are well-known for their dangerous and polluting practices.

Indonesia is also a party to the Minamata Convention, while Bangladesh has not ratified the treaty. Although the oil and gas sector is exempted from the international agreement in terms of their emissions management, countries must identify the potential sources of mercury emissions and releases within their own territory. Measures should be taken when high mercury sources have been identified.

AAL Wins “Top Asia Project Shipping Award” For The Fourth Time
Want to share your tips and advice? Got questions? Visit the community forum to ask questions, get answers, meet people, and share your tips!