128 ships were sold for scrap to the South Asian beaches in the first quarter of 2017*. Eleven workers were killed and at least four additional workers were injured whilst cutting down the vessels manually on the tidal beaches of India, Bangladesh and Pakistan. Beaching yards offer cheap, but dangerous and polluting scrapping. Ship owners have been aware of the detrimental effects of breaking ships on tidal beaches for more than 20 years, yet the ease with which existing environmental laws can be circumvented for the sake of the extra profit the shipping industry makes by selling to the beach yards allows the worst practices to persist.

In Gadani, Pakistan, yet another tragedy caused the death of shipbreaking workers. After the major explosion on the tanker ACES on 1 November 2016, another fire broke out on a Greek owned LPG tanker, GAZ FOUNTAIN. The fire claimed five lives and seriously injured one worker. The tanker had already caught fire in December 2016, only one month after the explosion which claimed at least 28 workers’ lives on the spot. Another worker was killed in a separate accident, when a lifeboat crashed down from the UK based Zodiac owned SNOWDON. Clearly not enough has been done in Gadani to ensure even the basic security for workers. Despite these recent disasters, ship owners and cash buyers continue to trade vessels with Pakistan breakers – this quarter 22 ships were sold for breaking at one of the world’s most dangerous places to work. 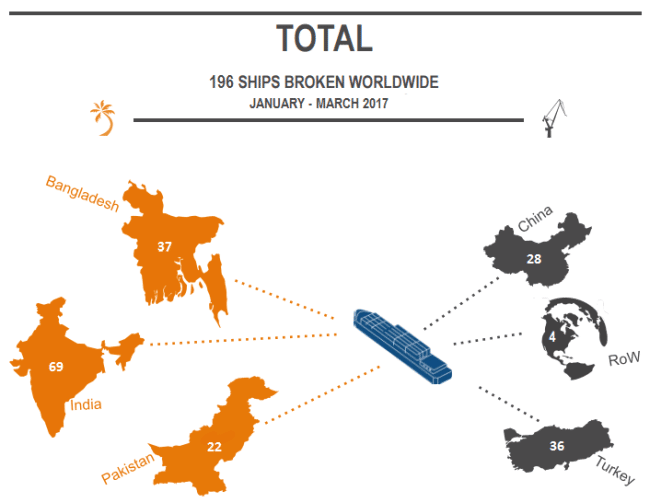 37 ships were sold to the Chittagong breaking yards. As many as six accidents struck the industry the first months of 2017 killing three workers and seriously injuring another three. Mohammed Azam was fatally crushed by a falling steel plate at Seiko Steel shipbreaking yard – mentioned before by the Platform in connection to other fatal accidents – during the breaking of the Belgian CMB owned BULL HUNTER.

Two fatal accidents happened at BBC Shipbreaking/KR yard: Rongchang Tripura passed away after falling from the Greek owned GRENADA; and Shaheb Mia was crushed by a falling steel plate during the cutting of the SALZGITTER. Bangladesh continues to be the breaking destination where severe and fatal accidents happen most frequently, yet this has not been a deterrent for most shipowners and cash buyers to sell their ships to for breaking.

The Alang beach in India was by far the most popular destination for end-of-life ships this quarter, with 69 ships sold for breaking. The yards in Alang have recently been portraying their practices as improved compared to Bangladesh and Pakistan, but the overall unnecessarily risky conditions of breaking ships on tidal beaches remains. Serious accidents were reported in Alang this quarter, resulting in at least two fatalities. On 4 March a worker died when a crane collapsed. There were rumours of another worker dying after falling from great heights two weeks later, but this could not be confirmed.

On 16 March there was a fatal accident in a steel cutting workshop called Sohil Oxygen Co, whose owner is also owner of the Lucky Steel Industries, which is part of the Lucky Group chosen by Maersk to break its ships in Alang. The businesses in the area and the Gujarat Maritime Board remain unwilling to share accident records, and information on what actually happened to those workers who died was clouded by the defensive messaging of the industry in the media.

The lack of transparency in Alang remains a serious concern, as does the fact that there is no hospital in Alang. Ships in Alang are taken apart in tidal waters using a method that is banned in Europe, the US and China and that makes it impossible to ensure rapid access for emergency vehicles and containment of pollutants such as oils and toxic paints.

European companies accounted for half of the vessels beached in South Asia the first quarter and where involved in many of the fatal accidents that took place in this poorly regulated industry. For the first time, German owners topped the list with 26 ships sold to South Asian breakers, followed by Greek owners with 17 beached end-of-life vessels. German ship owners, Hansa Mare Reederei GmbH & Company KG and Peter Döhle Schiffahrts-KG, top the list of the worst dumpers this quarter with each having beached five end-of-life ships.

Whilst grey- and black listed flags, such as Comoros, Palau and St Kitts and Nevis, continue to be particularly popular for end-of-life ships, also ships registered under the flags Malta and Cyprus ended up on the beaches. The EU Regulation on Ship Recycling will prohibit the dismantling of EU-flagged ships in substandard yards such as those in Alang, Gadani and Chittagong. However, by simply swapping flag to that of a non-EU country before selling the ship for scrap, ship owners can easily circumvent EU law.

Indeed, scrap dealers, such as cash buyers GMS and Wirana, will assist them in doing just that. The re-flagging before scrapping is a common practice and the Platform identified 38 ships, including two Malta flagged ships and one Madeira flagged ship, that changed their flag last quarter just weeks before hitting the beach.

While the EU is trying to redress the shipping industry’s addiction to beaching with the Ship Recycling Regulation, we have seen that European ship owners continue to opt for the worst breaking yards, resulting in the death of workers and pollution of sensitive coastal zones. European ship owners will continue to profit from the worst forms of the business unless the EU develops a financial incentive to curb the re-flagging of the vessels to circumvent the legislation in place.

*196 ships were sold in total the first quarter of 2017, meaning that 65%, ended up on beaches in India, Bangladesh and Pakistan. 51 of the beached vessels were container ships. The other main shipbreaking destinations, Turkey and China, received 36 and 28 vessels respectively. 4 ships were destined for recycling in other locations outside the main 5 breaking nations.

IHS Markit: Productivity Falters at World’s Top 30 Container Ports
Want to share your tips and advice? Got questions? Visit the community forum to ask questions, get answers, meet people, and share your tips!