The Human Rights at Sea initiative is delighted to announce the engagement with the NGO Shipbreaking Platform and which provides yet another significant international entity’s support to the emerging HRAS platform and its maritime human rights work globally.

HRAS Founder, David Hammond, said: “Following in-depth discussions with the NGO Shipbreaking Platform, we at Human Rights at Sea felt that the very important issues being raised, profiled and the successes being achieved by Patrizia Heidegger and her team, were ones that held real synergy with the HRAS aim to raise the profile, awareness, implementation and accountability for human rights protections throughout the maritime industry, especially where they are currently absent and being abused.

We are therefore delighted to be engaged with Patrizia and her team’s on-going efforts to make a real difference to human rights, labour and working practices of indigenous ship breakers who would otherwise not have a voice capable of being heard in the international community and the maritime industry.“

The Shipbreaking Platform is a coalition of environmental, human and labour rights organisations first created in September 2005. That year, it was realised by some of the few NGOs working on the shipbreaking issue that a broader base of support both geographically and in orientation was needed to challenge the arguments from a powerful shipping industry not used to being held accountable for its substandard practices. 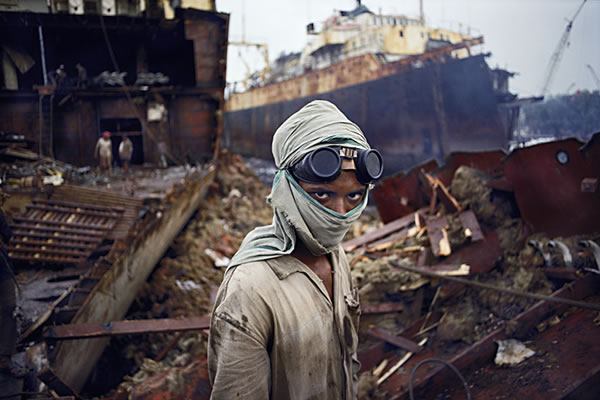 Due to increased political momentum, in part generated by the Platform itself, the coalition quickly evolved from being a European platform to a global one, including NGOs based in the largest shipbreaking countries, India, Bangladesh, and Pakistan. With member organisations based in consumer, owner as well as in the largest shipbreaking countries, the Platform has built up a solid north-south network and is the only organisation addressing the shipbreaking issue at the international level.

The overarching goal of the NGO Shipbreaking Platform is to prevent toxic end-of-life ships from being beached in developing countries. The majority of the ships sold for breaking today are simply run up on the tidal shores of India, Bangladesh and Pakistan. The beaching practice is at the source of extremely severe pollution, dangerous working conditions, exploitation of workers, and a blatant violation of international hazardous waste management laws.

Through our OFF THE BEACH! campaign, we aim to raise public awareness of the human rights abuses and pollution caused by shipbreaking practices in South Asia and promote marketplace incentives to divert traffic away from the infamous breaking beaches. We also initiate litigation and advocate on a national, European and international level for a safe and environmentally sound ship recycling policy. Our goal is to find sustainable solutions that encompass the principles of human rights, environmental justice, “polluter pays”, producer responsibility and clean production.

The Platform has already had success in blocking and forestalling ship exports (such as the French aircraft carrier Clémenceau, MT Enterprise and SS Independence) and imports (the Probo Koala in 2011) while promoting sustainable solutions requiring producer/industry responsibility for their products throughout their entire life cycle. Successfully bringing to the fore the intolerable realities of today’s shipbreaking practices; death, injury and pollution, the Platform has also seen great traction with its call for reforms within the EU, with certain OECD ship recycling interests, and most recently in Bangladesh and Pakistan.

At the European level, the Platform pushed and worked closely with the European Commission (EC) on ways to improve legislation, and has also been particularly successful in gaining support from the European Parliament (EP). Our policy recommendations were closely reflected in the EP Resolution of 26 March 2009, and more recently also influenced the EP’s position on a new EU Regulation on ship recycling. Our activities included sponsorship of three events and two photo exhibitions in the EP. Two events were attended by the former Environment Commissioner Stavros Dimas who spoke in support of our position.

More than 100 non-governmental organisations around the world, the UN Special Rapporteur on Human Rights and Toxics, and the European Parliament have voiced their support to the Platform’s objective to end the dangerous and polluting practice of breaking ships on tidal beaches. In recognition of the legislative and on-the-ground achievements of Platform member organisation BELA – and the Platform’s struggle on the shipbreaking issue – Syeda Rizwana Hasan, member of the Platform’s Board, received the prestigious Goldman Prize in 2009. She was also awarded the Magsaysay Award in 2012, considered to be Asia’s Nobel Prize.