During the summer, the Swedish-flagged ATLANTIC CARTIER and ATLANTIC CONVEYOR, the two last G3 vessels operated by the Italian Grimaldi Group’s subsidiary Atlantic Container Line (ACL), were sold for demolition. The German competent authorities were alerted about the imminent illegal export of the ships from the port of Hamburg and prompted to take action to stop the vessels from departing.

Despite the warnings and the clear signs that the ships were destined for scrap, the authorities did not halt the ships. The ATLANTIC CARTIER arrived in Alang, India, on the 20th of September, and the ATLANTIC CONVEYOR hit the beach on the 7th of October, after vessel tracking providers curiously indicated that the container carrier was “Steaming 4 Sunshine”. 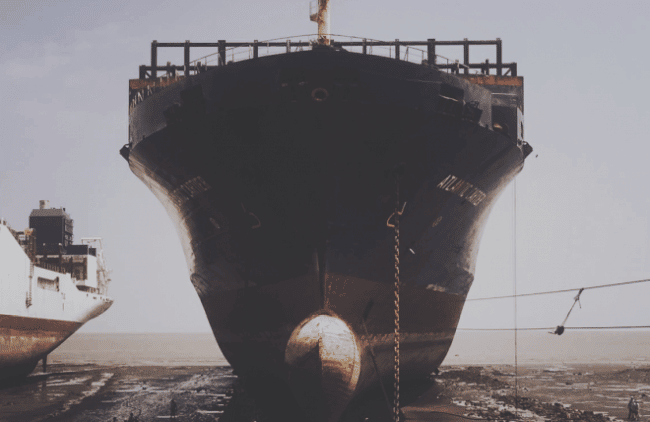 International waste laws and the EU Waste Shipment Regulation are usually circumvented by ship owners who falsely declare that end-of-life ships are in continued operational use when leaving a port, thereby concealing the fact that they are destined for scrapping and have, therefore, become a waste. The cases of the CARTIER and the CONVEYOR are no exception.

The German authorities were not the only ones that have been contacted before the vessels’ final voyage. Also authorities from Canada and the UK, countries through which the CARTIER and the CONVEYOR sailed before arriving in Hamburg for their last EU port call, knew that the ships had been sold to the beach; yet, when questioned, ACL did not reveal that the ships were sold for breaking. Once having left the EU, both vessels operated for a short while in South-Eastern Africa – still under the same name, flag and ownership – waiting for the attention on them to fade.

During that time, ACL contacted the Swedish authorities asking for advice on which steps should be taken if the company decided to recycle the ships. Despite the recommendations of Sweden to scrap the vessels in the EU or in an OECD country, there was no way to ensure that these recommendations would be followed, since at that point the ships were no longer in the EU. Rather, it is clear that this communication was a way for ACL to make it seem like the company had acted diligently by seeking advice from the flag-state, as well as to fraudulently make it seem as the decision to dispose of the container carriers was only taken once outside of EU waters.

According to the German port authorities, there was no evidence base for the arrest of the vessels, even though the logos of both the CARTIER and the CONVEYOR had been painted over before the final voyage. Moreover, it was well-known within the industry that these two sister ships would be sold for breaking in the summer, as ACL itself indicated that the ships would be scrapped on the cash-buyer GMS’ website last year. In light of this, the Platform has recently sent a letter to the German authorities asking them to hold Grimaldi Group’s ACL accountable for having breached European waste laws.

End-of-life sales to South Asian yards are done with the help of a cash-buyer, a company specialised in trading end-of-life vessels to the dirty and dangerous beaching yards. It is not the first time that Grimaldi Group sends its ships to be broken on the beaches: the ATLANTIC CONCERT and ATLANTIC COMPASS were beached in Alang last year. In 2016, during an official meeting in Rome, the Platform raised serious concerns regarding the more than 90 Italian-owned end-of-life vessels that had been sent to dirty and dangerous scrapping yards in Bangladesh, India and Pakistan in the last seven years. The Platform advised the Italian Ship Owners Association, including representatives of Grimaldi Group, to stop selling their end-of-life vessels to unscrupulous cash buyers, and urged the Italian ship owners to ensure the safe and environmentally sound recycling of their ships. Hence, it is clear that the Platform’s message has not been taken into consideration.