With the oil and gas sector seeing a downturn since 2014, the Platform has documented an increasing number of offshore units sold for scrap. While the recycling of fixed installations occurs under strict regulations, there are serious concerns regarding the recycling of floating structures, which classify as vessels.

Around 200 floating structures have been identified as scrapped globally since 2015 – an estimated 40% of these assets ended up on South Asian beaches, where they were broken up under conditions that cause irreparable damage to the coastal environment and put workers’ lives and health at risk. 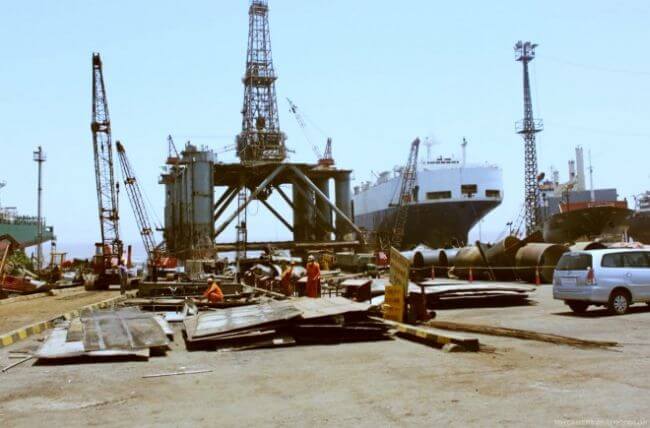 Numerous floating platforms and oil and gas structures can be found in the North Sea, where the global oversupply in the rig-market is pushing the oldest assets to be scrapped. There are currently 59 floating mobile drilling rigs in the North Sea, 18 of which were built before 2001.

Whilst some of the older units might be converted/upgraded, it is estimated that most of them will be scrapped in the coming years. So far, the only structure which operated in the North Sea and has been traced to a South Asian beaching yard is the FPSO North Sea Producer. There is a real risk, however, that we will see more of these cases coming up in the near future with more decommissioning projects in the North Sea.

The NGO Shipbreaking Platform advocates for the use of green recycling capacity already existing in the region. Indeed, North Sea recycling yards have years of experience decommissioning fixed oil and gas structures. There are several dry docks and contained slipway facilities where the dismantling of floating structures can take place safely and with due regard for labour and environmental concerns.

Enhancing the recycling of offshore structures and ships in Europe would furthermore bring opportunities for the many workers that were laid off after the recession in the oil and gas sector in 2014.

The report was published with the support of the Norwegian pension fund KLP. KLP promotes, as an essential part of its responsibility, practices of corporate responsibility, and responsible investment. As a large investor in Norwegian companies, and companies based outside of Norway operating in the North Sea, it strives to ensure the responsible recycling of ships and offshore assets, aiming at contributing to a shift towards better practices in the sector.