The Maersk-owned floating oil production and storage tanker, North Sea Producer, left the UK in May 2016 and was directly towed to Bangladesh, where it arrived on 14 August 2016. Two days later, the North Sea Producer was beached at the Janata Steel shipbreaking yard in Chittagong. The vessel is likely to contain large amounts of highly contaminated residues including NORM (natural occurring radioactive material). It is currently being torn apart on a tidal beach, sadly known for the human rights abuses and environmental pollution caused by substandard shipbreaking. The tanker’s export from the UK for demolition in Bangladesh was illegal under the European Waste Shipment Regulation. The NGO Shipbreaking Platform calls on the UK Government to hold the Maersk-owned North Sea Production Company responsible for illegal trafficking in hazardous waste.

The case has recently been high up on the agenda of Danish media, prompting both policy makers and investors of Maersk, including Nordea, and pension funds PFA and KLP, to react. Whilst Maersk claims that they sold the vessel for further operational use, they have so far been unwilling to reveal which company from the oil and gas sector bought the vessel and claimed to be able to operate it. Taking the current market conditions into account, it was highly unlikely that Maersk was able to find a new owner for the North Sea Producer within the oil and gas sector. 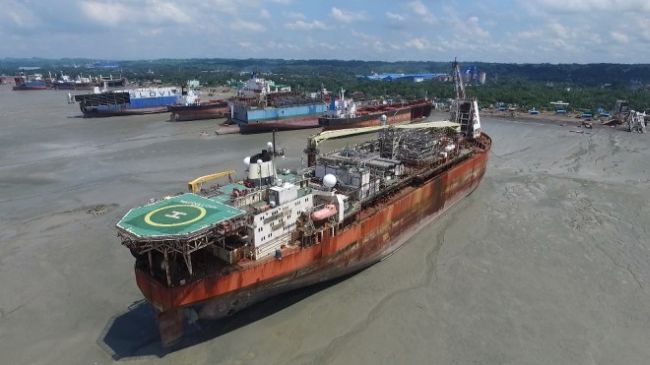 The North Sea Producer was owned and operated by UK-based North Sea Production Company, a joint venture between Danish Maersk and Brazilian oil & gas company Odebrecht, with 50% ownership each. Having operated in the North Sea as an FPSO, the vessel is likely to contain large amounts of residues that are contaminated by NORM and sulphur in addition to the various other hazardous materials in its structure and tanks. The Bangladesh shipbreaking yards are not equipped with any infrastructure that could safely remove and dispose of such toxic wastes. The North Sea Producer was allowed into Bangladesh based on a fake certificate stating that the tanker did not contain any hazardous materials. The import of end-of-life ships containing hazardous waste into Bangladesh is banned, but circumvented with such false documents.

“After the recent revelations on Maersk’s shipbreaking practices in India, we also had to learn that Maersk shamefully exposes workers in Bangladesh to enormous risks,” said Patrizia Heidegger, Executive Director of the NGO Shipbreaking Platform. “If Maersk sells a contaminated old oil tanker to an anonymous post box company in the Caribbean under the pretense of further operation use, this is at best a total failure of due diligence, if not punishable negligence. We expect the UK authorities to hold all involved companies responsible for illegal hazardous waste trafficking.”.

In late April, local newspapers wrote about the sale of the North Sea Producer. The North Sea Production Company was quoted as still being the owner and soon to strike a deal of which the details were confidential. Later, the newspapers stated to have been informed that the FPSO would be reused at the Tin Can Island Port in Nigeria. However, when the ship left Teesport, UK, on 17 May it sailed straight to Bangladesh, with only a few fuel stops for the tug boat Terasea Hawk on its way. Its first stop was in Namibia – way beyond the stated destination in Nigeria.

“It is highly likely that the North Sea Production Company sold the ship directly to cash buyers GMS (Global Marketing Systems), via an anonymous post box company in St. Kitts and Nevis. GMS is one of the world’s largest companies that specialises in selling end-of-life tonnage to the beaching yards in South Asia,” says Patrizia Heidegger. “While GMS has recently been extremely busy in polishing its image with claims of ‘green ship recycling’, the company’s track record – and obvious continued practice – tells another story. GMS continues to strike deals with some of the worst shipbreaking yards in the world, including those in Bangladesh where hazardous waste management capacity is completely absent, where illegal child labour persists, and where workers are killed or maimed in accidents that could have been avoided.”.

A Saint Kitts and Nevis-based postbox company, Conquistador Shipping Corporation, became the new registered owner of the ship during its last voyage. Contracts for the vessel with Janata Steel shipbreaking yard were signed with the help of a Chittagong-based agent. It is likely that GMS is behind Conquistador Shipping Corporation which is used for last voyage ship registration. GMS has been involved in similar cases before, such as in 2012 when they used anonymous post box companies in Panama and the end-of-life flag of Belize to illegally export two French ferries, SeaFrance’s Cézanne and Renoir, from France to India.

In the coming years a high number of vessels, including semi-submersible platforms, used by the oil and gas sector operating in the North Sea will be decommissioned. Some of these structures have already ended up on the South Asian beaches for breaking under conditions that are both dangerous and polluting.

“We are asking governments to effectively prevent any future illegal waste trafficking as we have seen with the case of the North Sea Producer. The large number of vessels and structures used in the North Sea that will need to be decommissioned in the coming years should prompt public strategies for the creation of jobs in the EU that promise the environmentally sound recovery of valuable resources,” says Patrizia Heidegger.