A third report by the investigative journalists of Danwatch, “Maersk and the shadowy deals”, reveals that the Danish container ship giant has incentivised the sale of 14 ships to substandard shipbreaking yards on the beaches of Bangladesh and India in 2013/2014. At the same time, Maersk prided itself with a progressive ship recycling policy and its cooperation with state-of-the-art yards in China. The report in Danish was released last week and has created a media uproar in Denmark. The story has been widely featured on TV2, daily newspaper Politiken and other major outlets. It triggered critical reactions from a wide range of stakeholders and forced Maersk to admit that such shady deals should never have been made.

Late in 2013, Maersk sought early termination of a charter party for 14 ships due to the vessels’ poor rentability and the general overcapacity in the container ship market. Maersk had previously been the owner of the vessels before they sold them to a finance construct in Germany, MPC Flottenfonds III, in 2009. Maersk then continued operating them based on a long-term charter. In 2014, the Platform investigated that the 14 vessels operated by Maersk had ended up in some of the worst shipbreaking yards in Bangladesh and India, and contacted Jacob Sterling, then Head of Sustainability at Maersk. He said: “We encourage other ship owners to recycle their ships in a responsible way, including those that we charter ships from.” In an article, Sterling also stated: “NGOs argue that beaching must end now. We agree”. 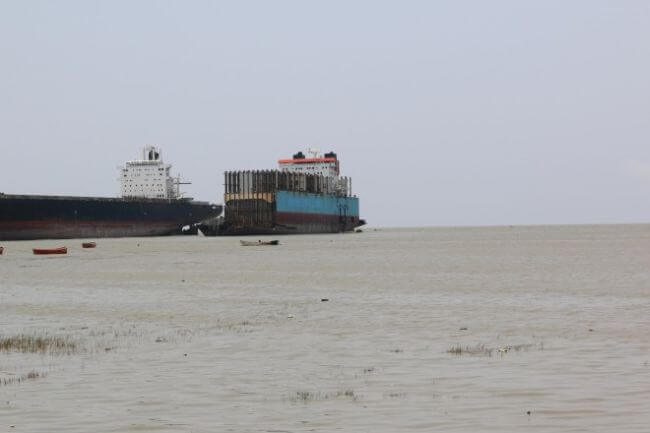 Sterling’s response regarding the chartered ships was a lie: a quick look into Maersk’s addendum to the charter contract is enough to understand that. First, Maersk explicitly asked the German owner through a clause in the contract to ensure the immediate demolition of the vessels in order to get them off the market. Second, Maersk demanded in another clause that the vessels had to be sold for the highest price available on the scrap market – without any consideration of environmental or social standards. With the latter clause, Maersk put pressure on the ship fund to sell the 14 vessels for a minimum price of 447 USD per ton, a price that corresponded at the time to the prices offered in South Asian beaching yards. No facility operating under safe and sound conditions would have been able to pay such a high price. Moreover, the contract between Maersk and MPC states that if MPC were to sell the vessels for a lower price, Maersk would have to pay the difference. And, crucially, if MPC managed to sell for a higher price, it was under an obligation to pay Maersk the difference in profit earned. The MPC case is likely not an isolated one. The Platform found that Maersk had sold another three older ships to Greek owner Danaos and immediately chartered them back on a long-term basis. Also these three vessels ended up in beaching yards.

“In 2014, we believed that Maersk was an industry leader with regards to sustainable ship recycling practices. In Maersk’s CSR reports, we could read about their much publicised cooperation with Chinese ship recycling yards, we were shown futuristic videos on ‘total vessel recycling’ and the Head of Sustainability made strong ‘off the beach’ statements”, says Patrizia Heidegger, Executive Director of the NGO Shipbreaking Platform, “getting hold of the charter contract opened our eyes to the reality: Maersk actively incentivised business partners to sell to the highest bidder, inevitably offering the lowest standards. Maersk was fully aware that these ships would be broken in some of the worst yards in Bangladesh and India and even had a direct financial interest in that by earning an extra profit.”

After Maersk’s business tactics were revealed in the Danish press, the shipping line has received strong criticism for its unsustainable shipbreaking practices from Danish Parliamentarians, leading Danish environmental organisations, and its own investors. “Maersk had no other choice but to apologise publicly for both their shady deals and the illegal export of their floating storage and production tanker, the North Sea Producer, from the UK to Bangladesh. Maersk admitted to the media that they should not have made such deals”, says Heidegger, “however, apologies for the worst practices now seem to be the strategy to make the current breaking practice in Alang, India, look like a good solution”.

Danwatch’s investigations at Maersk’s Shree Ram yard in Alang have shown severe shortcomings related to fundamental labour rights, environmental safeguards and basic health and safety standards. Maersk’s support of the beaching yards in Alang stalls any development in India to move ship recycling to modern industrial platforms. Such a transition was already supported by the Government of Gujarat and investors in the 1990s when the Pipavav dry dock was built in order to bring the Indian ship recycling industry to an acceptable level. However, the shipping industry’s profits on the beaches of Alang have consolidated the beaching yards’ monopoly in India, while innovative new businesses from India have been stifled.

”We and other key stakeholders maintain: the future of shipbreaking is not on the beaches of South Asia, but in modern ship recycling facilities”, says Heidegger, “Maersk should lead the way in supporting innovative companies, rather than scotching development in India by supporting a method which is banned in Europe. While India’s space programme is launching satellites for the US and Canada, the shipping industry wants us to believe that Indian companies can dismantle ships only on a beach?”