Last year, at least 52 workers lost their lives on the shipbreaking beaches in South Asia. The worst explosion in the history of shipbreaking struck an oil tanker beached in Gadani, Pakistan, killing 28 workers and injuring more than 60. The NGO Shipbreaking Platform is working to ensure that shipping companies sell their obsolete vessels to safe, clean and just recycling facilities.

Each year the NGO Shipbreaking Platform collects data and publishes an annual list of ships dismantled world-wide. In 2016, 862 vessels were dismantled. 668 of these ships were sold for dirty and dangerous breaking on the beaches of South Asia. Whilst ship owners are increasingly portraying themselves as conscious of the problems caused by shipbreaking on beaches, Bangladesh – where conditions are known to be the worst – remained the preferred scrapping destination worldwide in terms of tonnage dismantled. 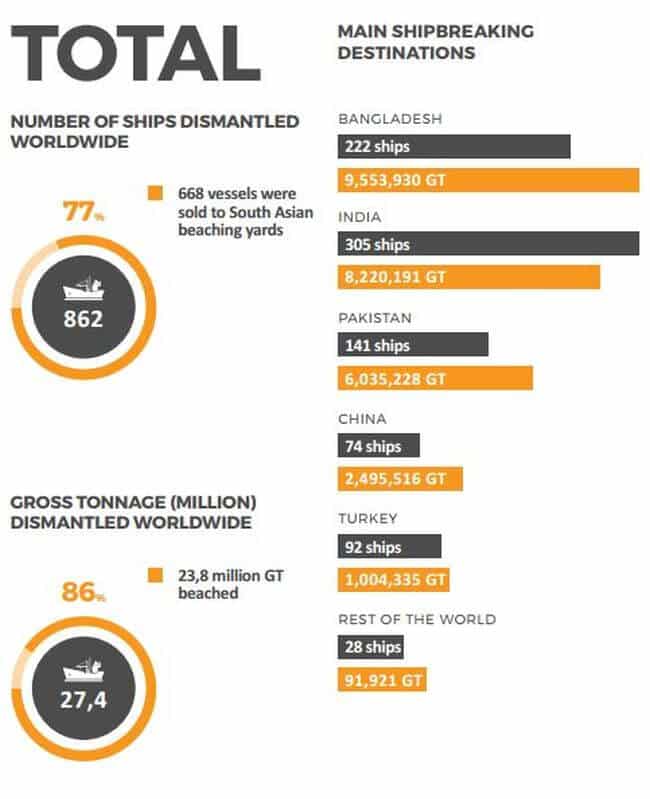 Most vessels scrapped in 2016 were bulk carriers, followed by general cargo and container ships, oil and gas tankers, roll-on roll-offs, passenger vessels and oil platforms. Looking at the size of vessels scrapped on the beaches of South Asia, Pakistan received the largest vessels followed by Bangladesh, while Indian yards scrapped more medium-sized ships. China and Turkey tend to recycle smaller vessels on an average. Thus, the larger the vessel the more likely it ends up on a beach in Pakistan or Bangladesh – where conditions are worst.

It may be surprising for a country whose industry is proud of green technology and engineering solutions, but in 2016 Germany was responsible for the worst shipbreaking practices amongst all shipping nations when one compares the size of its fleet to the number of ships broken irresponsibly. German owners, banks and ship funds had a staggering 97 ships rammed up on the beaches of South Asia out of a total of 99 vessels sold for demolition. That not being enough, close to 40% were broken in Bangladesh, where conditions are known to be the worst. Greece was
responsible for the highest absolute number of ships sold to South Asian shipbreaking yards: 104 ships in total. 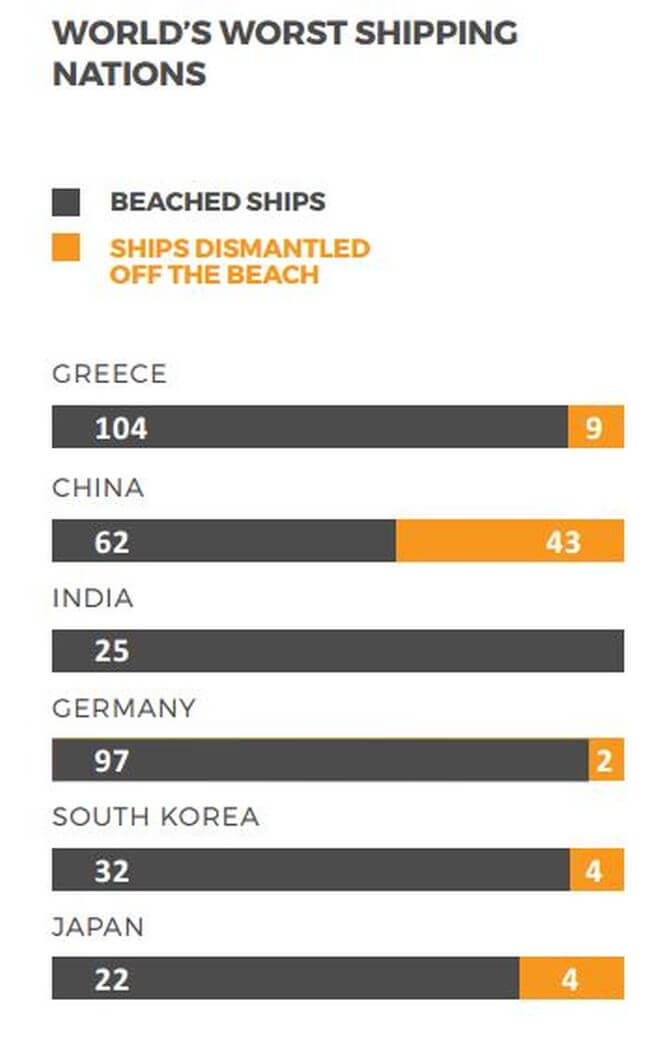 Since the Platform started to compile data in 2009, Greek shipping companies have unceasingly topped the list of owners that opt for dirty and dangerous shipbreaking. Other major ship-owning countries like Japan and South Korea sent nearly all of their old vessels for breaking in substandard yards on the beaches of South Asia. Chinese ship owners sold 43 of their Chinese flagged end-of-life vessels to domestic ship recycling facilities, for which they receive subsidies from their government, while still dumping more than half of their old ships on beaches. India sold all vessels to beaching facilities, 13 out of 25 were sold to Pakistan and Bangladesh.

European ship owners are responsible for more than one third of all ships sold for breaking. The total number of EU-owned and/or EU-flagged vessels dismantled in 2016 worldwide were 328: 274 of these ships, representing a jaw-dropping 84% of all European end-of-life ships, ended up in either India, Pakistan or Bangladesh. In terms of tonnage scrapped, European-owned ships thus represented more than 40% of all end-of-life vessels scrapped on the beaches.