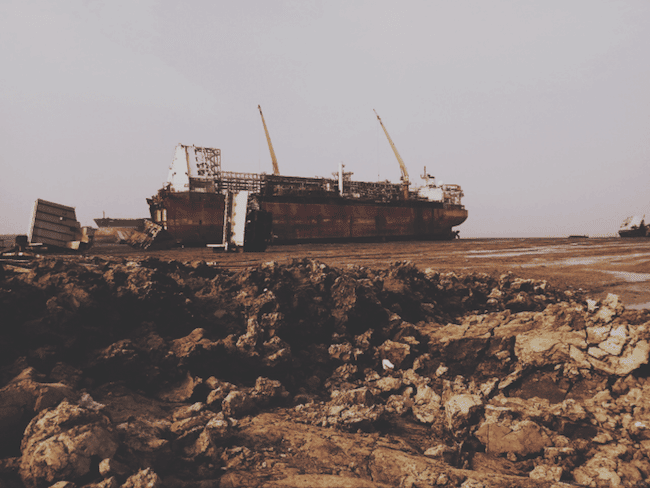 There were a total of 193 ships broken in the second quarter of 2019. Of these, 146 ships were sold to the infamous scrapping beaches of South Asia, where working conditions are known to be dire and breaking practices cause irreparable damage to the coastal environment [1]. Between April and June, Platform sources recorded three accidents that killed at least five workers on the beach of Chittagong, Bangladesh, bringing the total death-toll of the shipbreaking industry this year to at least eight workers.

In the early morning of 15 May, a loud blast shook the Chittagong shipbreaking area. A fire broke out on board the vessel BUNGA KELANA 4 (IMO 9178343), beached at Mahinur Ship Breaking yard, also known as Premium Trade Corporation. Video footage of the attempts to rescue workers showed extremely rudimentary conditions and a total lack of appropriate emergency response and equipment. Cutter men Mohammod Rubel, Hamidul Islam and Md Jolil lost their lives in the accident. Four other workers suffered severe burn injuries. Platform member organisation OSHE reports that the death of another worker, Tara Miya, was covered up in the same yard just a few days before the tragic event. On 20 May, Md Manik died when electrocuted at Bathiari Steel. He had been tasked with the illegal construction of barge.

At least another six workers were severely injured at the Bangladeshi shipbreaking yards last quarter. Two were injured when a fire broke out on the bulk carrier COMPROMISE (IMO 9044475) on 28 May. According to maritime databases and local sources, the ship was sold by South Korean SK Shipping to HM Steel shipbreaking yard in Chittagong. 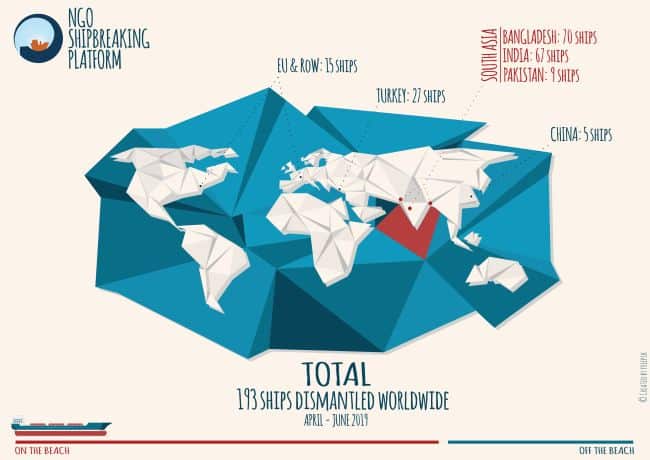 Accident records in Gadani, Pakistan and Alang, India, are extremely difficult to obtain. The local government in Alang does not publish any official statistics, and it systematically refuses to provide civil society organisations and independent journalists access to the yards. Recently stopped by the Gujarat Maritime Board, journalists from French public television were forced to hand over their camera so their footage could be deleted. Part of their video material, however, managed to see the light of day and was aired in June. It effectively reveals the poor working and environmental conditions that the local authorities in Alang seek to hide.

In Bangladesh, it was revealed that the shipbreaking company BBC Ship Breaking had been fraudulently given the permission by local authorities to wipe out a protected mangrove forest in order to establish a new yard. Following the filing of a complaint by Platform member organisation BELA, the High Court imposed a six months’ stay on the lease contract and have asked the local authorities to explain why they blatantly ignore national forest protection laws. In 2009, 14.000 mangrove trees were illegally cut to expand the dirty and dangerous shipbreaking activities in Chittagong. Despite a clear order by the High Court in 2010, none of these trees have been replanted.

Poor enforcement of national and international environmental and labour laws causes irreparable damage to the environment, workers and local communities. As yards can avoid costs linked to proper environmental protection and the respect of labour rights, their lower operational costs render them a financially more profitable end-of-life destination for ship owners. In the second quarter of 2019, Japanese, Saudi Arabian and Greek ship owners sold the most ships to South Asian yards, followed by Indonesian and South Korean owners.

All ships sold to the Chittagong, Alang and Gadani yards pass via the hands of scrap-dealers, also known as cash buyers, that most often re-register and re-flag the vessels on their final voyage. Grey- and black-listed flags of convenience are particularly popular with cash buyers, and more than half of the ships sold to South Asia this quarter changed flag to the registries of Comoros, Niue, Palau and St. Kitts and Nevis just weeks before hitting the beach. These flags are not typically used during the operational life of ships and offer ‘last voyage registration’ discounts. They are grey- and black-listed due to their poor implementation of international maritime law.

The high number of flag changes should induce serious concerns with regards to the effectiveness of legislation based on flag state jurisdiction only, such as the EU Ship Recycling Regulation which became applicable on 1 January 2019. According to the Regulation, EU-flagged vessels have to be recycled in one of the 34 approved facilities included in the EU list. The Platform recorded at least two ships that de-registered from an European flag registry prior the last voyage to South Asia in order to circumvent the legislation. Both the Maltese-flagged ALPHA MILLENIUM and the Greek-flagged MARVELLOUS, which maritime sources link to Greek shipping company Alpha Bulkers, swapped their flags to Comoros prior reaching the beach of Chittagong, Bangladesh.

The Platform has found that at least five other vessels [2], owned by Danish Maersk, Greek Chartworld Group, Greek Costamare and Norwegian KGJS (Kristian Gerhard Jebsen Skipsrederi), called at EU ports before starting their final voyage towards the shipbreaking beaches. It is likely that the decisions to export the assets for scrap were taken by these companies while on EU waters, in direct breach of the EU Waste Shipment Regulation. Clearly, more efforts are needed to ensure proper enforcement of current legislation on ship recycling as highest profit seems to be the only decisive factor most ship owners take into account when selling their vessels for breaking.

[1] During the second quarter of 2019, the following number of vessels were broken in other locations: 27 in Turkey, 5 in China, 3 in Europe and 12 in the rest of the world.