On the morning of Friday, May 22nd, the Lamong Bay Terminal in Surabaya, East Java, Indonesia, was inaugurated by the President of Indonesia and a group of distinguished officials. It was an historic moment for Indonesia, an important milestone in the country’s transport development program that is improving the movement of goods through its vast waterways. Lamong Bay Terminal’s automated container handling system was provided by Konecranes. 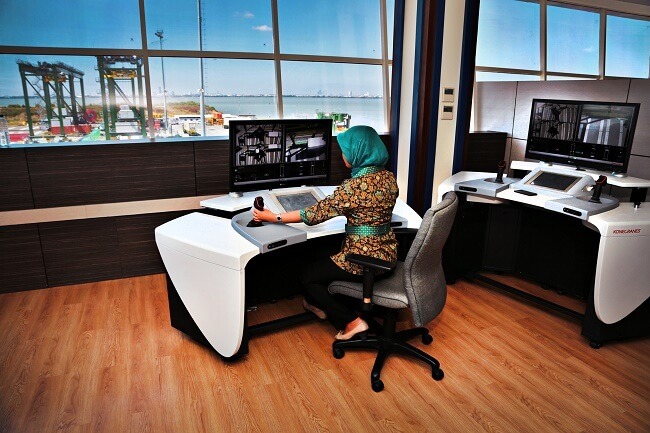 “Lamong Bay Terminal is the next generation container terminal. Thanks to the reliability, productivity, predictability and safety provided by our Konecranes automated container handling system, we will provide our shipping line customers with uninterrupted, reliable container flow. This will be the key to build up business success in Indonesia and South-East Asia,” says Mr. Prasetyadi, President Director, Pelindo III.

It’s the next generation

Most importantly, Konecranes’ unique Active Load Control technology is now extended with an advanced machine vision system which detects containers and container profiles with great precision. As the container approaches the target, the container profile becomes more accurate. The effects of dust, fog etc. are minimized. The system senses neighboring container stacks from the point of view of the load, and performs canyon driving. The automated container handling process becomes more precise and predictable.

Lamong Bay Terminal’s automated container handling system is designed and built by Konecranes across all of its constituent parts: from the Active Load Control system of the ASCs that eliminates container sway, to the automation technology and software, and up to the GUI of the Remote Operating Stations.

Pekka Lundmark, CEO and President of Konecranes, attended the inauguration ceremony. “This is an important day for Konecranes and Indonesia. The future is very bright for Lamong Bay Terminal. I’m confident that it will achieve lasting business success,” he said.