Mitsubishi Shipbuilding Co., Ltd., a Group company of Mitsubishi Heavy Industries, Ltd. (MHI) based in Yokohama, today held the christening ceremony for a next-generation LNG (liquefied natural gas) carrier under construction for a joint venture of Mitsubishi Corporation and Nippon Yusen Kabushiki Kaisha (NYK Line). The ship, named “Diamond Gas Orchid,” is the first “Sayaringo STaGE” type vessel, Mitsubishi Shipbuilding’s newest carrier that achieves significant improvements in both LNG carrying capacity and fuel performance thanks to a more efficient hull structure and an innovative hybrid propulsion system. After completion in late June, the Diamond Gas Orchid will go into service transporting LNG for the Cameron LNG Project, a project in the U.S. state of Louisiana in which Mitsubishi Corporation and NYK Line are jointly participating. 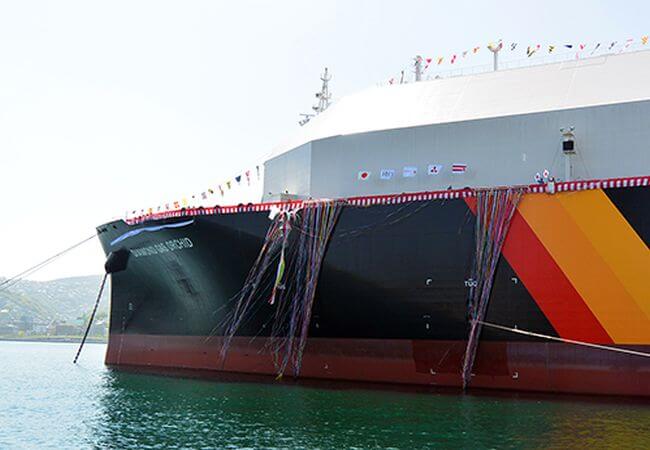 The Sayaringo STaGE succeeds the “Sayaendo,” a vessel highly acclaimed for its improved Moss-type spherical tanks that deliver a high level of reliability. The adoption of apple-shaped tanks in the new Sayaringo STaGE offering has enabled an increase in LNG carrying capacity without changing the ship’s beam, while incorporation of a hybrid propulsion system has significantly boosted fuel efficiency compared to the Sayaendo.

STaGE, an acronym deriving from “Steam Turbine and Gas Engines,” is a hybrid propulsion system combining a steam turbine and engines that can be fired by gas. Efficient use of the engines’ waste heat in the steam turbine results in substantial improvement in plant efficiency, enabling high-efficiency navigation throughout a full range of speeds. 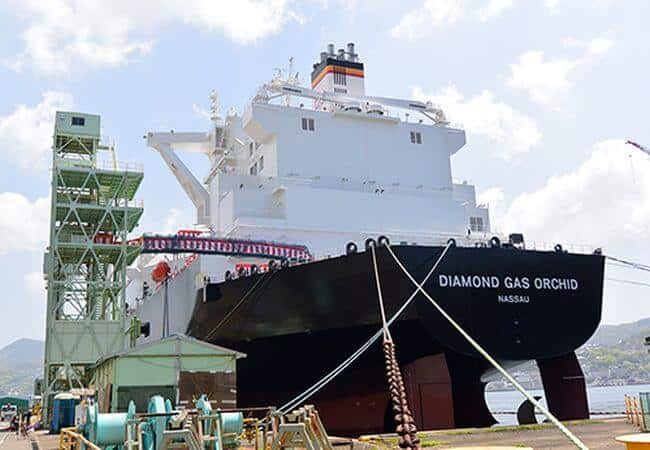