Aotea Maersk, the largest container ship to ever visit New Zealand waters capable of carrying 9,640 TEU , was officially welcomed to the Port of Tauranga by Transport Minister Hon Simon Bridges on 4 October, marking a new era in ocean freight.

Maersk Line Oceania Managing Director Gerard Morrison said the company is able to bring in the larger ships as it becomes the first container line to successfully tie New Zealand to its global mainline networks. 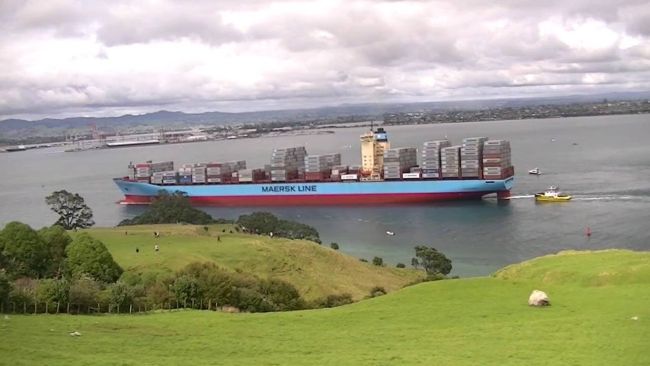 “The arrival of the Aotea Maersk marks a step change towards creating a network that is more fuel-efficient on a per-container basis whilst also significantly reducing the carbon footprint of the ocean freight component of the supply chain,” he said.

The Aotea Maersk is deployed on Maersk Line’s enhanced Triple Star service which now offers a fast weekly connection to North Asia providing New Zealand exporters with a sustainable, direct service to important markets including Taiwan, China, Korea and Japan. The Aotea Maersk, one of 11 vessels in the service rotation, will be capable of holding more than double the number of containers of ships that currently dock in New Zealand. The ship is 347 metres in length – longer than three rugby fields, end-on-end.

“Seeing this vessel arrive puts into perspective what can be achieved by working in collaboration with logistics and infrastructure partners, exporters, importers and the wider industry. It recognises Maersk Line’s commitment to the New Zealand market,” he said.

“The arrival of larger ships to our waters is a key milestone for New Zealand on its journey to become a more efficient trading nation and will enable New Zealand to better compete with export nations which already have big ships on their main trade routes,” he said.