On 6 August, the Suez Canal expansion project becomes operational. But the jury is out on whether it will spur more traffic or better accommodate the major rise in throughput since 2011. And many market participants say traffic is more sensitive to transit fees.

The project has taken the four double zones and six by-pass sections and joined them together to create a new channel, allowing ships to travel in both directions, with the aim of decreasing transit waiting time, reducing congestion and allowing more vessels to transit each day.

Since the start of 2015, gross transhipments have averaged 3.69mn b/d of oil equivalent (boe/d) —comprising crude, gasoline, gasoil, fuel oil, naphtha, LPG and other oil products — almost unchanged from the 2014 average of 3.7mn b/d but 71pc higher than the daily average in 2011. Over that period, the largest increases in shipment volumes have come from crude — mostly northbound — and fuel oil and naphtha, predominantly southbound.

The $8.6bn project should reduce vessel waiting times to three hours from up to 11 as well as allowing two-way traffic in the canal, but has not raised the maximum passable tonnage. An inauguration ceremony — with one convoy traveling in each direction — will take place on 6 August, followed by the official opening on 8 August. 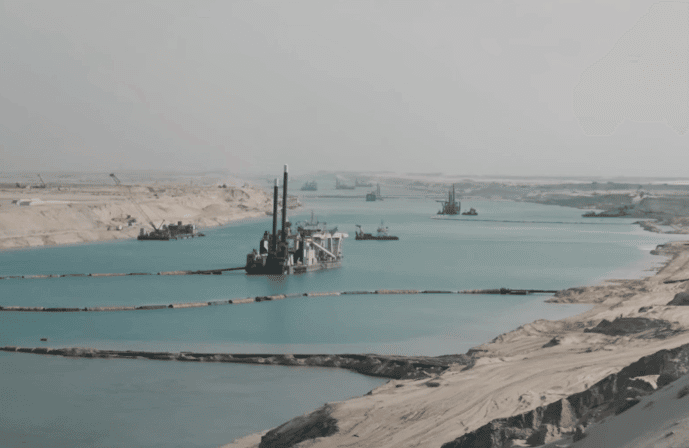 Secretary-general of the International Chamber of Shipping Peter Hinchliffe said: “Previously, the Suez canal saw a number of delays as a result of an inflexible convoy system and pilots to guide ships through the channel. But the new flexibility should help reduce this.” He added that, “Over the past 12 months, there have been numerous complaints by operators about delays in the Suez Canal”

But Hinchliffe, while noting the canal authority’s analysis that ship numbers will rise further with the expansion, is cautious, saying “I expect experience will tell over time as to by how much numbers will increase and [the expansion’s] impact”

Macroeconomic factors and toll levels may be far more influential in determining future shipment volumes than the introduction of two-way traffic. One freight analyst said the freight market is underwhelmed by the expansion, emphasising that maximum ship size will not increase and arguing that journey times will not, in fact, significantly shorten. A hike in rates would push more traffic to take the Cape route, particularly given the weakness of bunker prices.

Crude traders are not expecting any changes to the regional market stemming from the expansion of the Suez Canal. Currently, fully-laden VLCC tankers are unable to sail through the canal, and must part-discharge cargoes at Ain Sukhna to go through the Sumed pipeline to Sidi Kerir, reloading at the Mediterranean terminal. The expansion will not allow VLCC tankers to sail through fully laden, so oil companies will have to continue using Sumed to transport cargoes larger than 1mn bl from the Red Sea into the Mediterranean and beyond. They say delays passing through the Canal are not an issue for them.

The naphtha market has never been restricted by the limitations of the Suez Canal, because of the size of vessels employed, and participants expect trade flows to remain the same. But there are concerns that transit fees may rise, with a knock-on effect on naphtha traffic. Jet fuel traders are similarly unmoved, saying increased flows are unlikely. Suez is not a bottleneck for jet fuel traffic, cargoes being limited by the availability of product.

LPG flows are also unlikely to be affected. Currently, very little passes through the Suez Canal, since that route saves US cargoes only a day or two compared with the Cape, and eastbound shipments from North West Europe are now very uncommon. And, with the expansion of the Panama Canal, charterers looking to save time and money going to Asia Pacific will use that route instead.

The Suez Canal Authority says vessels with a draught of up to 66ft (20.1m) will be able to use the new waterway, and LNG carriers over 100,000m³ have roughly the same draught of 12.5m (41ft). But LNG Q-Max and Q-Flex carriers will be still be unable to use the expanded Suez Canal because of lock size, rather than vessel draught. And LNG shipbrokers add that the expansion will have a limited impact on transit of LNG carriers smaller than Q-Flex.