Now that a reduction of Chinese subsidies for Eurasian rail freight have been more or less announced, the arguments for a standstill, slow down or on the contrary, continued growth on the New Silk Road has been made. While some fear that it will all fall apart from here, others are more optimistic than ever before. Is the New Silk Road a bubble? Or is it here to stay?

It was the topic of discussion at the second RailFreight Webinar, held in the run-up to the European Silk Road Summit, held on 26 and 27 November in Venlo, the Netherlands. The topic will be further discussed at this event, as part of an extensive two-day programme full of content about the New Silk Road.

The market will definitely change, but the phase out of subsidies is necessary in the long run, Brekelmans said. “Continuing with these rates would not work. This is the only way to be competitive as a transport option on a realistic level.” 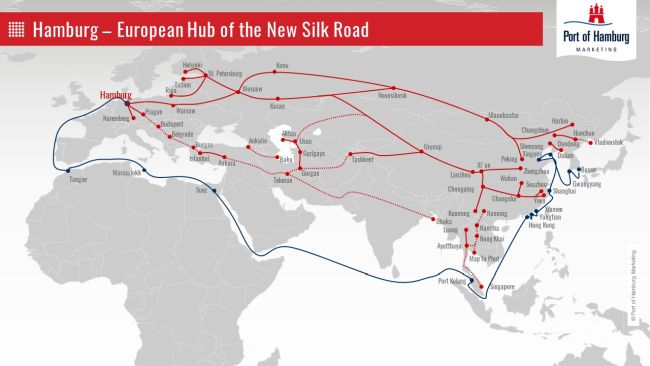 Although the subsidies provided by the Chinese government have boosted the volumes significantly, it has also caused an unrealistic market. Local governments could offer incentives of up till 5000 USD per container, depending on the region. The decision to ship cargo per train could be made based on price alone.

“When such prices change, some shippers may return to sea transport, but the New Silk Road is also mature enough to continue attracting the volumes, from air cargo for example”, said Groot Wassink. “We will look at innovative solutions to remain competitive.”

According to him, it is possible to continue offering competitive rates with such solutions. For example, where Nunner now includes a road leg from the South of China to Xi’an, this could also be done by train. “This makes the journey two to three days longer, but it will lower the costs with 300 to 400 USD.” Another way to lower the costs is by operating longer trains through Russia, where length restrictions are different from Europe.

The forecasted volume growth on the New Silk Road according to Roland Berger is 72 per cent up till 2027. However, when taking into account the current growth rates, this should be 215 per cent up till 2027, explains Alexander Labinsky of Prognos, who will be speaking about the forecasts at the European Silk Road Summit in Venlo, the Netherlands this year. If these statistics are anything close to accurate, it means that growth will slow down significantly.

However, this is already happening, the statistics of previous years indicate. Where the volumes rose by 160 per cent in 2015, they increased by 35 per cent last year, said Labinsky. “And this only makes sense, because we started from zero, which makes the growth rate logically high.”

“Growth seems no longer possible, at least for the time being”, concluded Hans Reinhard, President of InterRail Holding last month. “Although the the number of block train units went up, additional platforms were taken in operation in China and the number of destinations in Europe increased, train operators nor the state-owned railway companies will be able to offset these reductions, he believes. “It is to be expected that the marketing rates for single containers and container groups will rise again starting in 2020.”

That companies cannot carry the inflated costs alone is also confirmed by the webinar panel, but therefore the services will need to be improved, they reinstate. “In order to offer the same price even when subsidies decrease, we still need to take some steps. But there are definitely solutions available to remain competitive.”

Moreover, there are developments that indicate another push of volumes, Brekelmans said. “Take for example the electric battery market. This is a booming industry which could surge rail freight volumes if these batteries may be transported by train to China.” Currently, the Chinese government has put in place restrictions on this type of transport. According to some, the rules are currently being reviewed.

Another such push is expected due to the recent permission by the Russian government for the transport of fresh goods by train, noted Groot Wassink. The first shipment of such kind is expected to be carried out next year. “The growth rates will change according to the circumstances. The same has happened with ocean shipping and air freight. Luckily there are logistics companies that make it their job to think of solutions to deal with such developments.”

Do you want to watch the webinar? The replay is available here.