Firstly, the MEPC is expected to adopt amendments to the International Convention for the Prevention of Pollution from Ships (MARPOL) to significantly strengthen the “phase 3” requirements of the Energy Efficiency Design Index (EEDI) – meaning that new ships built from 2022 will have to be significantly more energy-efficient. Those amendments were approved at the previous session of the Committee (MEPC 74) in May 2019. 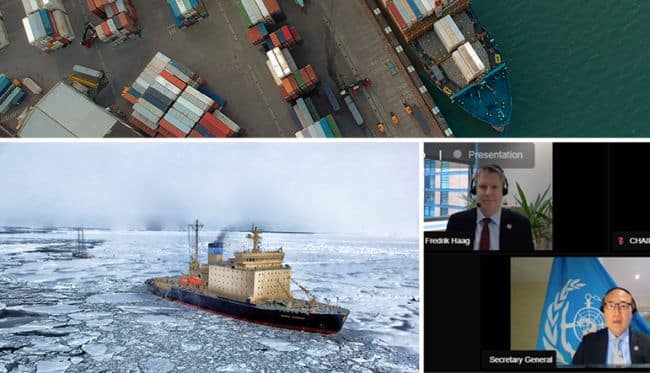 Moreover, the MEPC will discuss draft proposed amendments to MARPOL on short-term measures to reduce the carbon intensity of shipping. The aim is to add further energy efficiency requirements which would also apply to existing ships, by bringing in two measures: a new Energy Efficiency Existing Ship Index (EEXI) for all ships; and an annual operational carbon intensity indicator (CII) and its rating, which would apply to ships of 5,000 gross tonnage and above. Those draft amendments were agreed by IMO’s Intersessional Working Group on Reduction of GHG Emissions from Ships (ISWG-GHG 7) in October. If approved at this session of the Committee, they could then be put forward for adoption at the subsequent MEPC 76 session, to be held in June 2021. The MARPOL treaty requires draft amendments to be circulated for a minimum six months before adoption, and they can enter into force after a minimum 16 months following adoption.

Opening the meeting, IMO Secretary-General Kitack Lim invited delegates to come together to reach the necessary agreements. “It is of utmost importance that IMO continues to deliver on the implementation of the Initial GHG Strategy by means of concrete measures, which will ensure achieving the levels of ambition as set out in the Initial IMO GHG Strategy, providing a globally harmonized regulatory framework”, Mr Lim said. The initial strategy, containing ambitious targets to cut shipping emissions, was adopted in 2018.

The Secretary-General also invited the Committee to discuss a proposal by industry organizations to establish an International Maritime Research and Development Board and the Associated Fund. This could represent a significant step in promoting and facilitating more research and development on clean fuels and zero-carbon technologies. “IMO has to ensure that no country is left behind in the transition to decarbonization of international shipping”, Mr Lim added.

The Committee will also consider, with a view to approval, draft amendments to MARPOL to introduce a prohibition on the use and carriage for use as fuel of heavy fuel oil (HFO) by ships in Arctic waters on and after 1 July 2024. If approved, the draft amendments would be circulated for adoption at an MEPC session in 2021.

The Marine Environment Protection Committee (MEPC) is the decision-making body which addresses environmental issues under IMO’s remit, including the control and prevention of pollution from ships into the ocean and the air.

The meeting is chaired by Mr. Hideaki Saito (Japan).