With the new release of Sesam software for structural engineering and analysis, DNV GL is showing the results of ramped-up focus on cutting costs and boosting efficiency for customers. One of the key targets is reduction of tedious work.

“We are resolute about efficiency,” says Ole Jan Nekstad, Sesam Product Director at DNV GL – Software. “Efficiency gains have been the driver of this release. We are constantly asking, where can we help customers save money and become more efficient?” 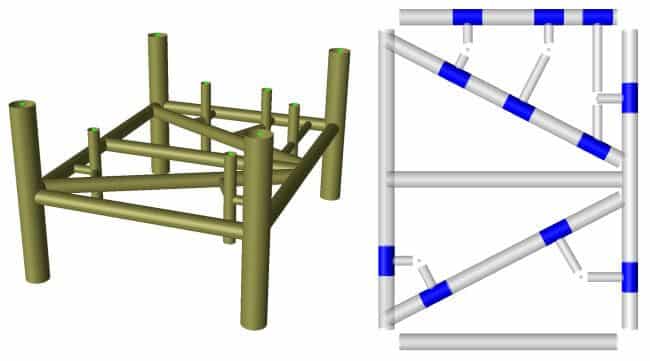 Along with feedback from the annual customer satisfaction survey, Sesam’s Customer Advisory Team has been instrumental in prioritizing the development work with new functionality for fixed, floating and ship structures. The key customers on the team provide extensive and detailed feedback, leading the Sesam developers to focus on three areas of innovation: engineering efficiency, verification efficiency and efficiency in cooperation as part of the bigger value chain. The new release of Sesam, with numerous updated modules, strides towards engineering efficiency.

One of the most newsworthy features targets an area where engineers have been doing repetitive and frustratingly tedious work: eccentricity modelling, where fictitious elements are introduced to counter modelling errors. Previously, when changes have been made to eccentric members and segmented members, each beam in the model has had to be recalculated manually. A typical offshore jacket structure contains hundreds of beams – in such a scenario, this creates unnecessary and costly manual work.

“This Sesam release makes eccentricity modelling as easy as any modelling and it’s powerful,” says Nekstad. “The new functionality will eliminate many man-hours and tedious work. You should never underestimate the importance of having fun in your job,” he says.

Other improvements include pile code checking and the ability to do earthquake design of tubular joints according to API 21st and 22nd edition, an important standard especially in Asia. Sesam now also has the ability to edit section stiffness, important both for newbuilds, operational assets and life extension.