Current measurements of the ESA ice thickness satellite CryoSat-2 have shown that the total mass of the Arctic sea ice was 36 per cent smaller last autumn than during the same period in the years 2003 to 2008. Five years ago the autumn ice volumes averaged 11900 km3. But in the second quarter of 2012 they had declined to 7600 km3. This conclusion is reached by an international research team after comparing the CryoSat data of the past two years with measurements of a former NASA satellite and with the results of sea ice investigations of the Alfred Wegener Institute, Helmholtz Centre for Polar and Marine Research. The study is published in the online issue of the scientific journal Geophysical Research Letters and for the first time shows how precisely scientists can observe the development of the Arctic sea ice using CryoSat-2.

When the Arctic sea ice melted so far in the late summer of last year that a new negative record was set up, sea ice physicist Stefan Hendricks could not have been closer to the course of events – in the Central Arctic. He and colleagues set out with helicopters from the research vessel POLARSTERN to survey the thickness of the remaining ice with a sea ice sensor; and this over an area of more than 3500 kilometres. Stefan Hendricks and colleagues use such datasets to check the measurement method and the measurement results of the CryoSat-2 ice satellite which the ESA (European Space Agency) launched into space on 8 April 2010. 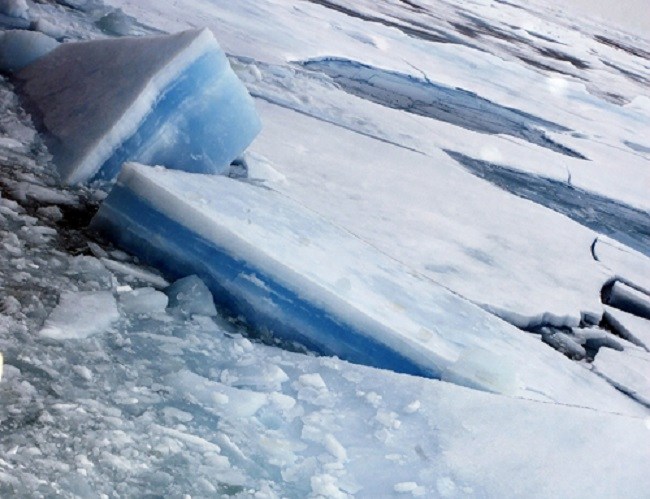 The satellite has a radar altimeter which measures the height of the ice surface above the sea beneath. CryoSat-2 circles the Earth on an orbit which brings it closer to the North Pole than any of its predecessors. Its 1000 metre wide radar beam travels almost once over the entire Arctic within one month, collects high resolution data and, unlike its predecessor ICESat, also penetrates cloud cover. This is exciting technology which is helping scientists to learn more: “We now know that the CryoSat measurement method functions well. With the assistance of the satellite we have been able for the first time to prepare a virtually complete ice thickness map of the Arctic”, says sea ice physicist and co-author Stefan Hendricks from the Alfred Wegener Institute, Helmholtz Association for Polar and Marine Research (AWI). AWI sea ice experts have been measuring the thickness of the sea ice since 2003 in an ESA project.

The scientists primarily attribute these losses to the decline in the three to four metre thick, multiyear ice. “CryoSat data prove that this thick sea ice in a region to the north of Greenland, for example, at the Canadian Arctic Archipelago and also to the north east of Spitsbergen has disappeared”, says co-author Dr. Katharine Giles from University College London.

However, these new findings and the reliability of the CryoSat data are just the first step for the sea ice physicist Stefan Hendricks. “Measuring the sea ice via satellite has the great advantage that we are no longer dependent on the seasons and can also capture data in the winter. It was impossible to do this from an aircraft due to the darkness of Arctic winter”, explains Stefan Hendricks.

A constant measurement of the sea ice is urgently necessary, however. “We have been working towards this goal for years because only once we know how thick the winter ice in the entire Arctic is, can more accurate short term predictions about the development of the ice cover in the subsequent summer be made”, says Stefan Hendricks.

His personal goal is to soon be in a position to publish an AWI Arctic map with the current sea ice thickness every month. Stefan Hendricks: “Every scientist working on this subject will then be able to use this data simply and easily.”

APM Terminals’ Moín Container Terminal Receives Its First Vessel
Want to share your tips and advice? Got questions? Visit the community forum to ask questions, get answers, meet people, and share your tips!