The 8,600 TEU capacity CSAV Traiguen became the largest container ship to call a Guatemalan port when it arrived at Terminal de Contenedores Quetzal (TCQ) on Guatemala’s Pacific Coast on April 12th, 2017, on the maiden call of German-based Hapag-Lloyd’s Mediterranean Pacific (MPS) service. The previous record of 5,500 TEU was established just a month ago with the arrival of the Maersk Gironde into TCQ on March 26th.

TCQ, which was acquired by APM Terminals in March 2016 while under construction, opened for operations earlier this year, with the first trial vessel call completed in February. TCQ, with an annual container throughput capacity of 340,000 TEU, is currently the largest facility between the port of Lázaro Cardenas in México, and the Panama Canal, on the west coast of Central America. The terminal, equipped with two STS cranes, and a berth depth of 14 meters, can handle vessels of up to 9,000 TEU capacity, making it the largest in Guatemala. 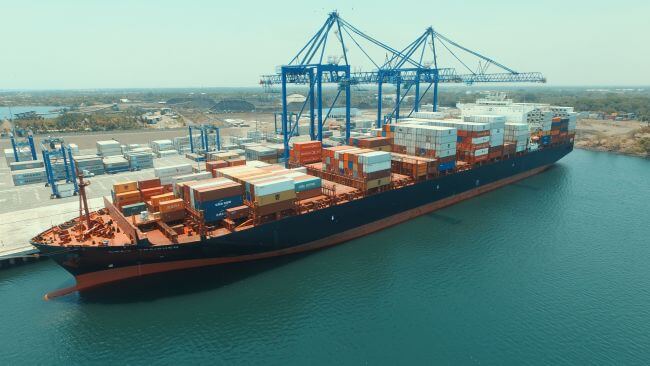 The MPS service will begin weekly calls to TCQ in early May, providing a direct link between Guatemala and the Ports of Los Angeles, and Oakland, California; Seattle, Washington; and Vancouver, British Columbia, in Canada on the Westbound route, and Mediterranean ports including Tangier, Morocco; Valencia and Barcelona, Spain; and Fos, France on the Eastbound service. Commodities include machinery, spare parts and industrial raw materials. On the Westbound service, Guatemalan exports include such products as refrigerated fruits, vegetables and fish, along with cotton, textiles and tobacco.