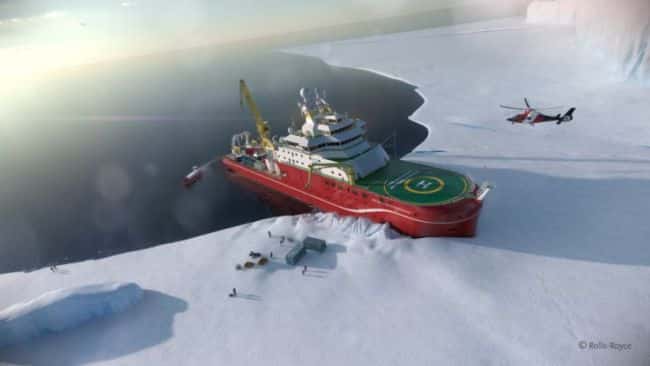 When she becomes operational in 2019, the new ship will provide a research platform from which scientists will tackle some of the most important issues facing humanity, including climate change, future sea level rise and the impact of environmental change on marine biodiversity.

“This ceremony is a very exciting moment for our scientists, engineers and operational support teams. It is particularly exciting for our ships’ officers and crew because the new ship will not only be their place of work but it will also be their home for several months each year. This £200 m Government investment in the new research ship, and a suite of infrastructure projects that will support it, will be a huge transformation in the way that BAS delivers its science programmes and its provision of operational support to the UK science community.”

Construction will be officially started by world-renowned naturalist and broadcaster Sir David Attenborough, after whom the ship is named. Sir David will start the “keel laying” process by initiating the lifting by crane of the first hull unit, weighing approximately 100 tonnes, on to the construction berth. This unit includes part of the ships keel and bottom shell plating and is the first of 97 units which will be erected to form the entire hull of the research ship.

“It is an honour to be invited to take part in the keel-laying ceremony. The Polar Regions are not only critical for understanding the natural world but they also have an enormous appeal for journalists, broadcasters and the public. I have had several opportunities to experience the power of these places first hand. This new ship will ensure that scientists have access to these enigmatic regions to uncover secrets that we can only imagine at this point. Scientists working on this new ship will inform everyone about our changing world for generations to come.”

This new ship will be a research platform to enable scientific investigations that are deeply relevant to society. State-of-the-art facilities and robotic technologies, designed to measure the impact of global change on our oceans, marine biodiversity and climate, will ensure that Britain remains at the forefront of polar science.

One of the new technologies that will be deployed from RRS Sir David Attenborough is the National Oceanography Centre’s (NOC) Autosub Long Range (ALR) Autonomous Underwater Vehicle which will be used by oceanographers to measure ocean and seabed properties over ocean scales. This ALR will be named Boaty McBoatface and will be the focal point on a new £1m Government-funded Polar Explorer Programme, an educational initiative that aims to inspire the next generation of scientists, engineers and citizens by engaging young people with the RRS Sir David Attenborough and polar science.

“The RRS Sir David Attenborough, with Boaty McBoatface operated from her as a robotic underwater vehicle, will be one of the most advanced research ships in the world. It will help inspire the next generation of scientists in the UK and build on our status as one of the world’s leading nations in polar science, engineering and technology.

“With Merseyside’s proud history and expertise in ship building, this project will support over 460 local jobs and apprenticeships, and provide a boost to the region and the whole Northern Powerhouse.”