On 30 January 2017, the naming ceremony took place for a new ice-breaking platform supply vessel (IBSV) built for Sakhalin-2 project. The vessel was commissioned by SCF Group under a long-term agreement with Sakhalin Energy. She was named after Gennadiy Nevelskoy, a famous explorer of the Sakhalin Island and the Russian Far East. The new IBSV was built to the best practice standards of global shipbuilding industry, and the highest specifications set for vessels that operate in harsh environments.

Gennadiy Nevelskoy (deadweight 3,000 tonnes) will have Saint Petersburg as her home port and is registered under the Russian flag. She is the first of four vessels commissioned by SCF Group for operations at the Sakhalin-2 project. The other three are ice-breaking standby vessels (IBSBVs) that have a smaller deadweight (2,000 tonnes), but offer enhanced functionality and a higher people-on-board capacity. 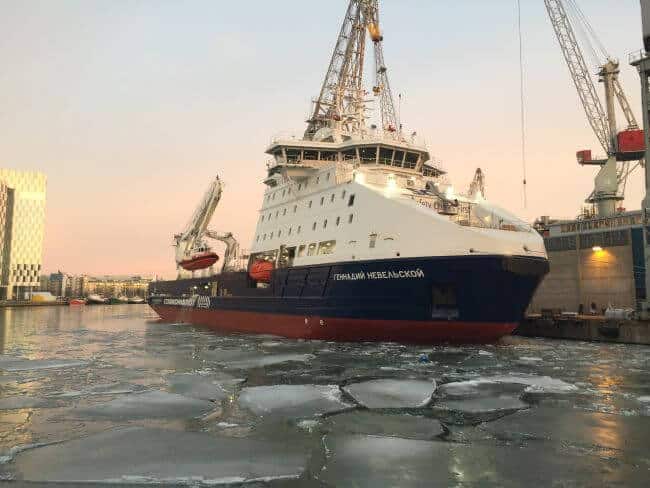 The agreement between Sovcomflot and Sakhalin Energy, signed in 2014, involves the operation of these four vessels for twenty years under the Sakhalin-2 project. The vessels will be used for the year-round delivery of supplies and consumables to Sakhalin Energy’s three offshore platforms in the Sea of Okhotsk, and for performing standby duty near the platforms. In an emergency, the vessels will also be used for integrated environmental protection and rescue operations.

The Russian Maritime Register of Shipping, which is providing technical supervision during the construction of all the four vessels, has assigned an ice class of Icebreaker 6 to the new IBSV.

The vessel naming ceremony was attended by Sergey Frank, President and CEO of PAO Sovcomflot, and Ole Myklestad, Sakhalin Energy’s Production Director. Also present at the ceremony was Vladimir Evenko, Chief Engineer and Director of Classification Department of the Russian Marine Register of Shipping.

The vessel was sponsored by Ekaterina Sokolova, PhD, Research Professor at the Centre for Maritime International Studies of the Admiral Nevelskoy State Maritime University in Vladivostok.

“The mutually advantageous cooperation between Sovcomflot and Sakhalin Energy has a 10-year history, and we pride ourselves in that it has been progressing year to year and expanding to a greater scale. Today, Sakhalin-2 operations are being serviced by eight Sovcomflot vessels, a number that we soon expect to increase to twelve. These positive dynamic reflects Sovcomflot’s strategic priorities that include the continuous expansion of Sovcomflot’s involvement in long-term energy projects, with a special focus on those being carried out in harsh environments. At the same time, adding Gennadiy Nevelskoy to our fleet enables us to strengthen Sovcomflot’s position as a global leader in the ice-breaking supply vessel class.”

“Gennady Nevelskoy PSV is currently the best vessel in its class. She was built in line with Russian and international maritime safety standards and is designed to operate successfully in the most challenging Arctic conditions. I am proud to tell you that over the next twenty years, she will make year-round supply runs, delivering equipment and materials to the Sakhalin-2 oil and gas platforms. Note that this multi-functional vessel can be used for emergency response purposes, further enhancing the safety of our operations.”

“The rich historical experience of Russian-Finnish cooperation, in building vessels for Arctic and Sub-Arctic seas, constitutes a good basis for contemporary cooperation projects in this field. It is symbolic that the ship on which Gennadiy Nevelskoy carried out the Amur expedition, Baikal, was constructed in 1848 in Helsinki.”

Among those invited to the ceremony were representatives of the Admiral Nevelskoy State Maritime University (MSUN), one of Russia’s main maritime universities, which is also named after the renowned explorer. They were Vladimir Verevkin, Doctor of Science, Head of Electrical Systems and Automation of Ships Department at MSUN’s Maritime Institute for Information Technologies, and Evgeny Butyaev, a fifth-year cadet of the University.

Alexander Kukel-Kraevsky, great-great-grandson of Admiral Nevelskoy, sent a message of greeting, which was read at the ceremony. “The name that gives birth to this icebreaking vessel is symbolic. Indeed just one hundred and fifty years ago, having abandoned a quiet, satisfied and high achieving career, Captain-Lieutenant Nevelskoy with his team made significant achievements within wild and inhuman conditions, following great hardship and sometimes at the cost of life, by having explored and, in essence, having created the conditions for the development of the Russian Far East. One can say he gave birth to this region,” the message noted.