In the near future, the Ecodelta – a hyper-modern, LNG-powered dredging vessel currently being built at the Barkmeijer shipyard in Friesland – can be found working in the port of Rotterdam. The ship is a key component of the new contract entered into by Bagger- & Aannemingsmaatschappij Van der Kamp and the Port of Rotterdam Authority. In this agreement, the Zwolle-based dredging company will be responsible for keeping Rotterdam’s port basins at the correct depth until 2023. The vessel will be taken into operation in the course of 2018.

The introduction of the LNG-powered dredging vessel is in line with the Port Authority’s policy to make Rotterdam the most sustainable port in its class. To this end, the Port Authority is promoting the transition from fuel oil to LNG as a transport fuel for the shipping sector. In addition, it strives to establish the Rotterdam port as a leading European LNG hub. By adopting LNG as a transport fuel, inland vessels, coasters and ferries can reduce their carbon dioxide (CO2) emissions by up to 20 percent and nitrogen oxides (NOx) by up to 85 percent. Sulfur and particulate emissions are more or less eliminated altogether. 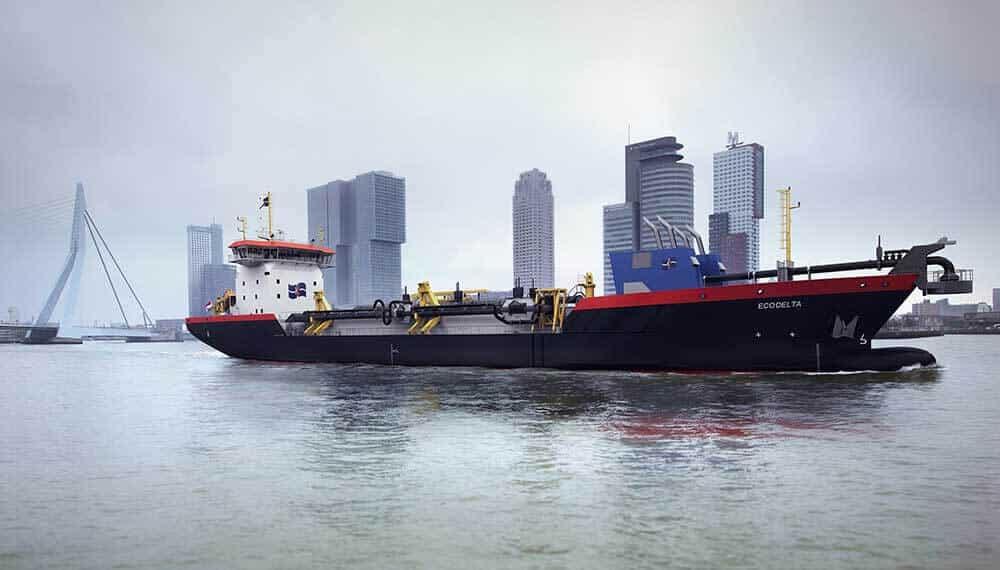 The Port Authority encourages the handling of LNG at the Gate Terminal (operated by Vopak and Gasunie); LNG distribution options for inland shipping at Seinehaven; the development of training facilities and the adaptation of Dutch and international legislation. It also presents shipping companies with financial incentives to switch to LNG as a transport fuel.

Van der Kamp has been contracted to handle dredging work in the Rotterdam port area. It will be keeping the port basins at depth on behalf of the Port of Rotterdam Authority. All in all, the contracted work concerns an annual volume of 5 million cubic metres of dredged material. Dredging is done by a number of vessels, including the Hein and the Rijndelta, which are 36 and 30 years old respectively. The Rijndelta will be handling the main share of the maintenance work, while the Hein will ‘step in’ when activities need to be scaled up due to excess siltation. The Ecodelta is expected to replace the Rijndelta in the longer term.