Launching ceremony of the first from series, modern car – passenger ferry built for one of the Norwegian Owner took place in Remontowa Shipbuilding S.A. on Friday, 8th of March 2013, Remontowa Shipbuilding is the biggest production shipyard in Poland, the only one with so extensive experience in construction of ecological, gas powered ferries. During last five years there were been built eight gas powered ferries serving local car – passenger transport along Norwegian coast. All ferries are successfully operated and received recognition of the Owner and passengers.

Launched vessel, building number B 613/1 is the biggest one from previously built gas – powered ferries in Remontowa Shipbuilding. Construction of this ferry is distinguished by using  latest technology and innovative solutions.

In contrast to previously delivered ferries  using diesel or gas power, this one will be driven only by LNG and emergency CNG gas. Such solution enables reduction of harmful emissions into the atmosphere, which is a particular advantage in the case of vessels serving the local connection. 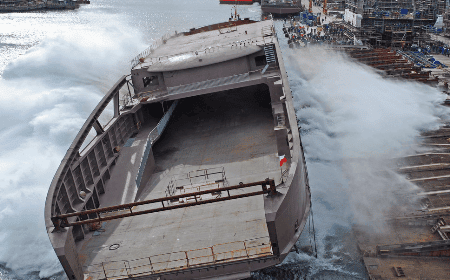 Constructed vessels will be the biggest ones in their class. Ferries will be able to take on board 550 passengers and 165 cars. The passengers will be offered the comfortable lounge situated under car deck. Due to increase safety, two evacuation systems will be installed in the lounge. The vessels will be equipped with modern automation systems which allows to reduce number of the crew.

The ferries are built according to the project elaborated by Norwegian design office LMG Marin and Remontowa Marine Design & Consulting under the supervision of classification society Det Norske Veritas (DNV) and Norwegian Maritime Authority (NMA).
The sequential ferries built by Remontowa Shipbuilding significantly consolidate our position on the demanding, Scandinavian market, increasing chances for new contracts.

Our filled up order book offers the opportunity for next launching ceremonies which are expected in coming weeks. Among them there will be the next PSV vessels and car – passenger ferry.