The draft International Code of Safety for Ships using Gases or other Low flashpoint Fuels (IGF Code), along with proposed amendments to make the Code mandatory under SOLAS, were agreed by the inaugural session of the Sub-Committee on Carriage of Cargoes and Containers (CCC 1).

The basic philosophy of the IGF Code is to provide mandatory provisions for the arrangement, installation, control and monitoring of machinery, equipment and systems using low flashpoint fuels, such as liquefied natural gas (LNG),  to minimize the risk to the ship, its crew and the environment, having regard to the nature of the fuels involved.

The Code addresses all areas that need special consideration for the usage of low flashpoint fuels, based on a goal-based approach, with goals and functional requirements specified for each section forming the basis for the design, construction and operation of ships using this type of fuel. 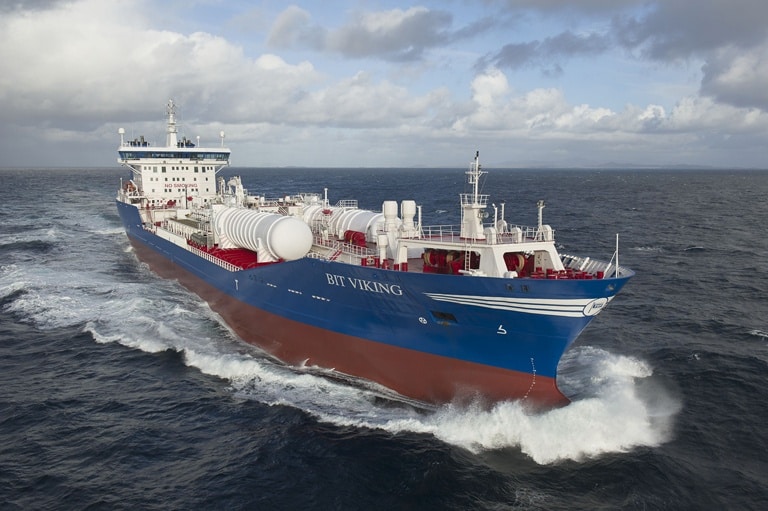 The Bit Viking was the world’s first vessel to have its main machinery converted to burn LNG as fuel. (Pic: DNV-GL)​

It was agreed that the new IGF Code should apply to new ships and to existing ships converting from the use of conventional oil fuel to the use of gases or other low-flashpoint fuels, on or after the date of entry into force of the Code. The IGF Code would not apply to cargo ships of less than 500 gross tonnage, but the provisions of the IGF Code could be applied to such ships on a voluntary basis, based on national legislation.

The draft SOLAS amendments along with the draft IGF Code, will be submitted to the parent body, the Maritime Safety Committee, at its ninety-fourth session (MSC 94, 17 to 21 November 2014), for approval with a view to subsequent adoption. The draft amendments include a new Part G in SOLAS chapter II-1 (Construction – Subdivision and stability, machinery and electrical installations) related to ships using low-flashpoint fuels, requiring such ships to comply with the IGF Code; and related amendments to SOLAS chapter II-2 (Fire protection, fire detection and fire extinction), covering to the use of fuel with a low flashpoint. Further draft amendments would update the form of safety certificates, to include reference to the new Part G.

Other matters considered by CCC 1

The Sub-Committee agreed draft informative material related to the IMO/ILO/UNECE Code of Practice for the Packing of Cargo Transport Units (CTU Code), for submission to MSC 94 for approval.

The Sub-Committee agreed the next set of draft amendments (03-15) to the International Maritime Solid Bulk Cargoes Code (IMSBC), for submission to MSC 95 (scheduled to meet in June 2015) for adoption, following finalization by the Editorial and Technical (E&T) Group.

Draft amendments to IMSBC Code on “Harmful to the Marine Environment” developed
The Sub-Committee agreed to invite the Marine Environment Committee (MEPC), at its sixty-eight session (MEPC 68) in May 2015, to consider a separate set of draft amendments to the IMSBC Code, introducing non-mandatory provision of cargo information relating to whether or not the cargo is harmful to the marine environment (HME), in order to facilitate the implementation of the revised MARPOL Annex V regulations for the prevention of pollution by garbage from ships, which entered into force on 1 January 2013. The responsibility for classifying and declaring whether a solid bulk cargo is HME or non-HME, lies with the shipper.

MARPOL Annex V prohibits the discharge of all types of garbage into the sea unless explicitly permitted.

Generally, discharge is restricted to food wastes, identified cargo residues, animal carcasses, and identified cleaning agents and additives and cargo residues entrained in washwater which are not harmful to the marine environment.

In addition, a draft new informative section 14 of the IMSBC Code on Prevention of pollution by cargo residues from ships was developed, for submission to MEPC 68 for its consideration.  The new section reproduces relevant sections of MARPOL Annex V and the 2012 Guidelines for the implementation of MARPOL Annex V.   MSC 95 will be invited to consider the outcome of MEPC 68, when considering the draft amendments to the IMSBC Code for adoption.

The Sub-Committee agreed draft revisions to update MSC.1/Circ.1352 on Amendments to the Code of Safe Practice for Cargo Stowage and Securing (CSS Code) and MSC.1/Circ.1353 on Revised Guidelines for the preparation of the Cargo Securing Manual, based on an IACS Unified Interpretation to interpret the reference to containerships as meaning dedicated containerships and other ships for which arrangements are specifically designed and fitted for the purpose of carrying containers on deck. Also agreed were additional draft revisions to Annex 14 of the CSS Code, based on an IACS Unified Interpretation providing a common understanding of the dimensions and arrangements specified in the annex.

The Sub-Committee began preparing the next set of draft amendments (38-16) to the International Maritime Dangerous Goods (IMDG) Code and authorized E&T 23, which is scheduled to be held in spring 2015, to prepare the draft amendments. The E&T Group will take into consideration comments made and decisions taken at CCC 1 related to a number of specific cargoes and the outcome of the UN Transport of Dangerous Goods (TDG) Sub-Committee, in order to harmonize the IMDG Code with the eighteenth revised edition of the UN Recommendations on the Transport of Dangerous Goods, Model Regulations. The E&T Group will also evaluate any new proposals submitted to the group.

The Sub-Committee discussed the development of the approved continuous examination programme (ACEP), following development of a pilot database by the International Container Bureau (BIC), and established a correspondence group to determine the extent of any barriers to the development and global usage of such a database.

The International Convention for Safe Containers, 1972, as amended, requires containers to be inspected and approved regularly, through a periodic examination scheme (not less than five year intervals) or through the Approved Continuous Examination Programme (ACEP), in which examinations are performed in connection with a major repair, refurbishment, or on-hire/off-hire interchange, not  less than once every 30 months. Many container owners and operators follow the ACEP programme. ​