USS Gerald R. Ford (CVN 78) is the lead ship of the new Gerald R. Ford class of aircraft carrier, the first new class in more than 40 years and will begin the phased replacement of Nimitz-class carriers when the ship is commissioned. 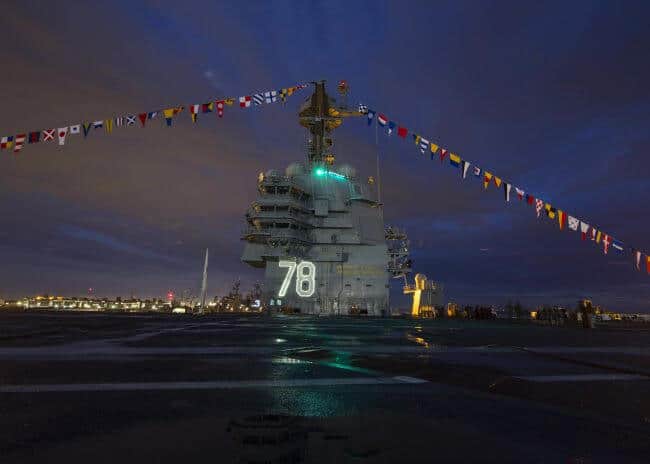 CVN 78 honors the 38th president of the United States and pays tribute to his lifetime of service in the Navy, in the U.S. government and to the nation. During World War II, Ford attained the rank of lieutenant commander in the Navy, serving on the light carrier USS Monterey (CVL 26). Released from active duty in February 1946, Ford remained in the Naval Reserve until 1963. Ford was elected to the U.S. House of Representatives in 1948, where he served until President Nixon tapped him to become Vice President in 1973. Ford became president in the aftermath of the Watergate scandal and served in the country’s highest office from 1974-1977.

“The nation’s going to be very proud of USS Gerald R. Ford,” said Chief of Naval Operations Adm. John Richardson. “I am incredibly thankful for the shipyard workers and Sailors who worked amazingly hard to bring this mighty ship to life. This Saturday will be a huge day for our Navy and our nation. The new technology and warfighting capabilities that Ford brings will transform naval warfare, making us a more lethal Navy. The increased combat power will enable new ways to combine information, ships, aircraft and undersea forces, changing how we operate and fight.”