On December 1, Bahrain was the stage for the 39th Shared Awareness and Deconfliction (SHADE) conference. A forum to discuss counter-piracy in the Gulf of Aden and in the Indian Ocean and the importance of cooperation between naval units in the region, industry and other concerned organizations.

NATO as a deployed operational partner, co-chaired for the last time, this bi-annual forum. The Chairmanship is a role that has rotated among NATO, the European Union Naval Forces (EU NAVFOR) who runs EU Operation ATALANTA and Combined Maritime Forces (CMF) who deploys Combined Task Force 151 (CTF151). 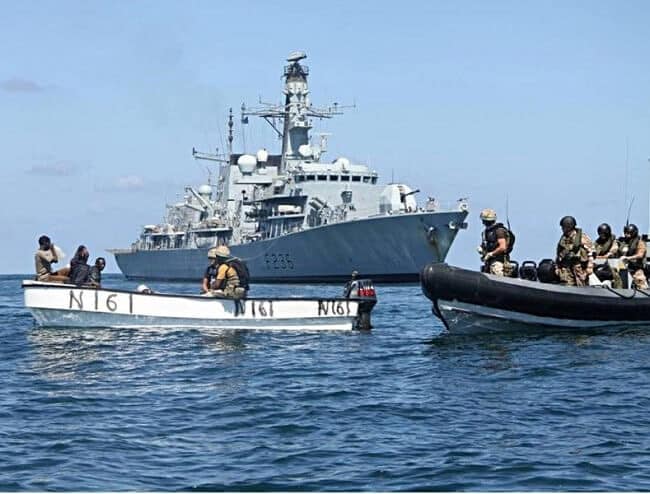 More than 100 delegates from 25 countries, representing the military task forces including independent deployers, international organizations, industry, think-tanks and NGOs participated in the conference. Several presentations and speakers have addressed on the current counter-piracy activities and other security challenges during the two-day agenda.

The Honorable Lydia Wanyoto, Deputy Special Representative of the Chairperson of the African Union Commission spoke on the AMISOM mission and the challenges ahead. Col (Ret.) John Steed MBE, representing the independent think-tank “Ocean Beyond Piracy” presented on the UNODC’s sponsored program “Hostage Support Partnership” (HSP), designed to provide crucial support to hostages held in captivity and to secure a safe release and repatriation of these victims of Somali piracy.

Mr. Mustafa Aydin, Shipping office from the UN World Food Programme (WFP) provided an update on the WFP issues of concern on Maritime in the Indian Ocean including the large-scale displacement affecting millions of persons in Somalia and Yemen. Followed by Dr. Phillip Belcher, Marine Director INTERTANKO, who gave a presentation on the industry and its concerns in counter-piracy. These presentations were always followed by a debate, enabling further engagements.

“I would like to thank to General Magowan and Admiral Donegan as well as the navies represented here for the close cooperation and coordination NATO has enjoyed since 2008. Thanks also to the IMO and NGOs that have been in the forefront of the thinking and research on how to tackle the crisis.” said Vice Admiral Clive Johnstone, Commander, Allied Maritime Command. “Operation Ocean Shield must be considered a case of success. Coordinated efforts with EU NAVFOR, CMF and independent deployers, the adherence to Best Management Practices 4 (BMP) by most of the shipping industry, the adoption of private security teams on board merchants and capacity building with empowerment and governance strengthening in Somalia, have all contributes decisively to this achievement”.

“Energizing activities like the coordination, cooperation and information sharing were enabled through the format of this forum, revealing this event as of upmost importance and making it as a reference for similar operational activities.” said Captain Tufan Uslu, Assistant Chief of Operations at Allied Maritime Command. “Operation OCEAN SHIELD was honored to have Australia, Colombia, New Zealand and Ukraine units to join the mission”, concluded Captain Uslu.

NATO on the request of the United Nations, launched counter-piracy operations in the Gulf of Aden, off the Horn of Africa and in the Indian Ocean in October 2008. The mission was to help to deter and disrupt Somalia piracy attacks, while protecting vessels and helping to increase the general level of maritime security in the region. The last successful hijacking occurred in May 2012 and until this date Operation Ocean Shield conducted 116 interdictions of pirate activity involving 672 suspected pirates. However, the roots of piracy were not eradicated and the latest incidents are a fresh reminding to the international community.

NATO ceases Operation Ocean Shield in the context of major security challenges in the Mediterranean and in other waterspaces in its primary Are of Responsibility (AOR) but will remain engaged in the fight against piracy by maintaining maritime situational awareness, keeping the ability, flexibility and readiness to deploy should the situation determines. NATO Shipping Centre will continue to be engaged with stakeholders bringing a valuable benefit to this fruitful relation.

What is “Citadel” Anti-Piracy Method?

Secure Ship –Anti-Piracy Method: Can this Prevent Pirates from Climbing Your Ships?