General Dynamics NASSCO hosted a christening ceremony for the first ECO tanker for American Petroleum Tankers (APT) under construction at the company’s shipyard in San Diego. San Diego Mayor Kevin Faulconer spoke at the ceremony, and the ship’s sponsor, Mrs. Helen Downs, christened the ship with the traditional break of a champagne bottle alongside the ship.

The ECO tanker, the Lone Star State, is the first of a five-tanker contract between NASSCO and APT, which calls for the design and construction of five 50,000 deadweight ton, LNG-conversion-ready product carriers with a 330,000 barrel cargo capacity. The 610-foot-long tankers are a new “ECO” design, offering improved fuel efficiency and the latest environmental protection features including a Ballast Water Treatment System.

“Incorporating new and innovative green ship technology, these tankers are the future of American petroleum shipping. When delivered they will be among the most fuel-efficient and environmentally-friendly tankers anywhere in the world,” said Kevin Graney, general manager and vice president for General Dynamics NASSCO. 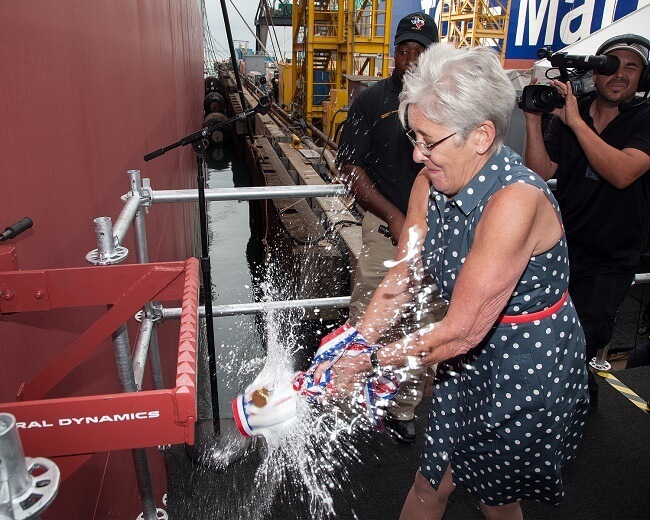 “This christening ceremony is an important step forward for Kinder Morgan’s expanding fleet of Jones Act product tankers and demonstrates the strong demand for domestic waterborne transportation to move petroleum products and crude oil,” said Robert Kurz, vice president of Kinder Morgan Terminals and president of American Petroleum Tankers, a Kinder Morgan, Inc. subsidiary. “We look forward to taking delivery of this vessel next month and, along with our seven other operating tankers, providing first-class service to our growing customer base.”

“The Lone Star State is a great example of the kind of innovative technology being employed by NASSCO and our blue tech industry. Its construction has employed hundreds of San Diegans and helped sustain jobs for thousands more.” Mayor Faulconer said. “This ship is a symbol of the jobs and opportunities the maritime industry brings to our city.”

The ships were designed by DSEC, a subsidiary of Daewoo Shipbuilding & Marine Engineering (DSME) of Busan, South Korea. The design incorporates improved fuel efficiency concepts through several features, including a G-series MAN ME slow-speed main engine and an optimized hull form. The tankers will also have dual-fuel-capable auxiliary engines and the ability to accommodate future installation of an LNG fuel-gas system.

A day earlier, on Friday, October 16, NASSCO shipbuilders began construction on a fifth tanker for APT.

The construction and operation of the new tankers are aligned with the Jones Act, which requires that ships carrying cargo between U.S. ports be built in U.S. shipyards.