The crew aboard the MV Portland have been refusing to sail the ship to Singapore where they will be marched down the gangway to make way for a group of foreign seafarers, who will be flown in to Australia to take their job.

The actions on board the vessel affect 19 crew. The seafarers were protesting the fact that multi-million dollar, American-based company Alcoa sacked them without reason – the route between Western Australia and Victoria will still be worked, only with a foreign ship and overseas crew.

The workers have been berthed in Portland for more than a week and received the original Fair Work Commission orders to sail on Monday. The Maritime Union of Australia was granted a stay on Thursday. 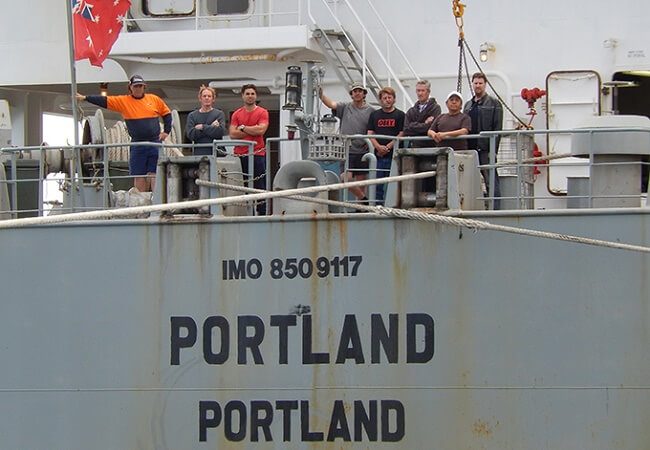 Yesterday, an appeal lodged by the Maritime Union of Australia was heard in Melbourne by the full bench of the FWC. That appeal was unsuccessful and the crew were again ordered to sail.

Assistant National Secretary Ian Bray said it was a disgrace that Alcoa had been allowed to dump Australian workers in favour of foreign workers, who will not be entitled to Australian wages, job protections, safety standards, or conditions. International Labor Organization minimum for able seaman equates to US$2-an-hour.

“What everyone is failing to grasp is this case is unique and sets an awful precedent. These jobs still exist in Australia,” Mr Bray said.

“It’s not like Holden assembly workers finishing the last commodore as the factory moves overseas, it’s more like the factory stays open, continues to be the beneficiary of generous tax breaks and other incentives, such as power subsidies, but flies in a workforce from somewhere in South East Asia to pay what wouldn’t even be considered a poverty wage.”

Alcoa has exploited a loophole, in that the company was granted a temporary licence by the Turnbull Government, a licence intended for use on foreign trading ships which would call into more than one Australian port. The MV Portland solely trades in Australian waters between Australian ports.

The MUA is challenging the use of the Temporary Licence in the Federal Court.

Mr Bray said the Turnbull Government was complicit in allowing this to happen.

“This is not the first time the Government has actively enabled profitable companies to sack workers and offshore jobs, but it is the first time in Australia we are seeing Australian jobs directly replaced by foreign workers,” he said.

“It’s maritime workers in this instance but who is to say it won’t be someone else’s job next?”

In an effort to be conciliatory the crew moved the MV Portland to another berth, so another ship could discharge at the smelter.

“We don’t want to put any other worker’s job at risk, apart from perhaps Malcolm Turnbull and the Minister responsible for this farce – Warren Truss. I wouldn’t lose any sleep if they were sacked,” he said.