You are here: Home › Shipping News › Multi-Ship Refueling Keeps Operation Atalanta Warships on Patrol off the Coast of Somalia
TwitterFacebookLinkedInPinterestBuffer

Operation Atalanta’s warships are deployed off the coast of Somalia to ensure that the pirate attacks that terrorized seafarers in the Indian Ocean and Gulf of Aden for a number of years are not allowed to resurge.

In order to ensure that the EU NAVFOR warships are able to maintain their counter-piracy patrols for longer periods, the ships top up their fuel and other essential stores, such as food, by conducting a Replenishment at Sea (RAS). 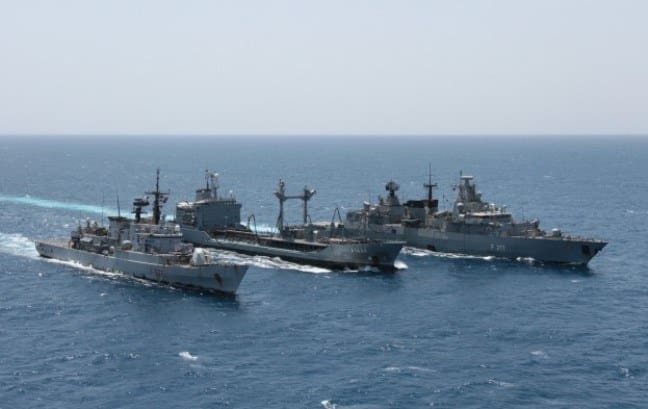 Refueling one ship is a complicated manoeuvre that requires focused communication and high levels of skill from all the crews involved. When another ship is added to the mix, the manoeuvre becomes even more complex and safety concerns increase.

After the RAS procedure was safely and successfully completed, the EU Naval Force’s ships returned to their duties to deter and disrupt the piracy threat off the Somali coast.During a recent multi-ship RAS, all four Operation Atalanta ships sailed together.