The stricken crude oil tanker, MT New Diamond, which caught fire off the coast of Sri Lanka, is being towed to Vadinar, Gujarat where the crude oil will be pumped out at the offshore oil terminal of the Kandla Port Trust. Meanwhile, the Captain of the ship was brought before the Colombo Magistrate’s Court at Hulftsdorp.

On September 17, a notice had been issued by the Colombo Additional Magistrate Priyantha Liyanage for the Greek Captain to appear before the court on 28 September considering a request made by Deputy Solicitor General Dileepa Peiris, who appeared for the Criminal Investigation Department (CID). The Attorney General instructed the CID to name the Captain as a suspect for committing offenses under the Prevention of Marine Pollution Act No. 35 of 2008. 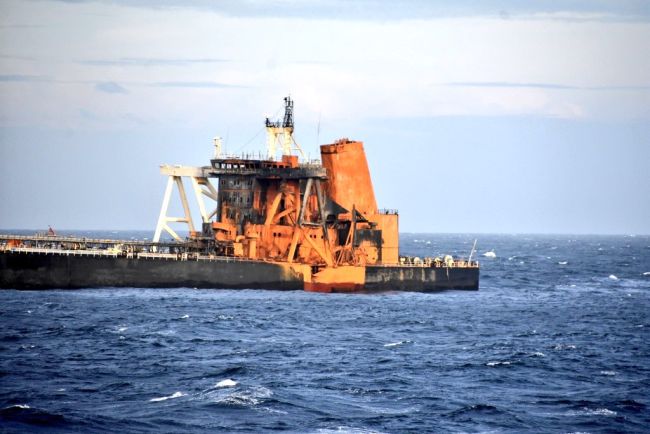 The Panamanian flagged tanker was carrying 270,000 tonnes of crude and 1,700 tonnes of diesel to Paradip port in India from the port of Mina Al Ahmadi in Kuwait. The operation to tow the vessel will be therefore be closely monitored by the Indian Coast Guard. The state government has also been informed since the will pass the coast of Goa too.

“The operation of towing the vessel has already commenced. It will take 12 days for the vessel to reach Gujarat.” said a coast guard official.

A senior coast guard official said that the ship is being towed by two tugs contracted by the salvor of the vessel, that was on fire for seven days off Sri Lankan east coast.

The fire had erupted in the engine room on Sept 03 morning in the deep sea about 38 nautical miles off Sangamankanda Point in Sri Lanka.

One member of the ship’s crew was killed and another seriously injured crew member was rescued by the Sri Lanka Navy. Other crew members, which consisted of 3 Greek and 16 Philippine, were rescued from the tanker by another merchant vessel plying nearby and were brought safely ashore by the Navy.