Coral reefs are among the most diverse ecosystems in the world and home to more than 25 percent of marine species. They serve as a food resource for half a billion people and protect coastal communities from storms and erosion. 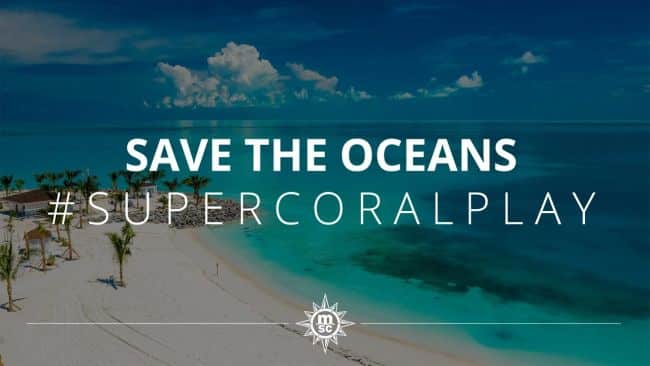 According to NOAA, some 84% of U.S. coral reefs are located within Florida alone where coral ecosystem-related spending has been estimated to generate over $6 billion in economic impact in the five South Florida counties via annual sales, income, and employment, supporting over 71,000 full- and part-time jobs.2 According to the UN’s Intergovernmental Panel on Climate Change, scientists predict that 70-90% of coral reefs are in danger of dying out within the next two decades (2030-2050).

Ocean Cay MSC Marine Reserve is in The Bahamas, 65 miles from Miami. Once an industrial sand excavation site, Ocean Cay has been transformed by MSC Cruises – its operator – into a private island destination with a flourishing marine reserve. The MSC Foundation, working in collaboration with a team of scientists and environmental experts, are identifying hardy species of coral, colloquially termed “Super Coral”3, that have survived recent extreme ocean heat events and other impacts in the waters near the island. By conducting research and studying and propagating such types of coral species, it is considered possible to restore reefs while enhancing their tolerance to future environmental change. This can provide a life-line for coral reefs in the region and ensuring their future survival.

Matthew McKinnon, Chair of the Advisory Board of MSC Foundation, said: “A #SuperCoralPlay is a simple action a person or business can take or pledge they can make to join the movement to help protect and preserve coral and reduce human impacts on the environment. Found at SuperCoralPlay.org, the campaign encourages people and businesses to share the message through the power of music using the official Super Coral Play song; donate to the cause to support scientific research in Florida and at Ocean Cay into Super Coral and to make a simple change in their life or business operations that will positively impact the environment.

“Over the years, at the newly-established marine protected reserve at Ocean Cay, more than half of the coral has already died. Similarly the ecological reef treasures of Florida – the coral state of the US – have been decimated, damaging marine life and leaving greater Miami exposed,” added McKinnon. “If we act now, we still have a chance to help the reefs and the marine life and the benefits they offer to communities. We need to contain ocean warming with more done to reduce emissions and we need to experiment and invest in research and development of Super Coral as well as advanced applied science to help regenerate resilient reefs, which is work MSC Foundation is developing in coordination with key international and local partners at Ocean Cay.”

This special scientific project will see some of the the world’s leading experts in marine biology and coral conservation collaborating together, including the University of Miami Rosenstiel School of Marine and Atmospheric Science (UM), Nova Southeastern University (NSU), the Perry Institute for Marine Science, the International Union for Conservation of Nature (IUCN) and The Centre Scientifique de Monaco (CSM), among other partners.

“The Miami Super Bowl Host Committee (MSBHC) launched Ocean to Everglades (O2E), the Super Bowl LIV environmental initiative in April to promote sustainability and raise awareness of the critical issues facing the health of the ocean and the Everglades,” said Rodney Barreto, chairman of MSBHC. “MSC Foundation and Ocean Cay MSC Marine Reserve were a natural partner for us and MSBHC is excited to be a part of their Super Coral Play campaign.”

Joining MSC Foundation, MSC Cruises and MSBHC are 54 current and retired NFL players and influencers, coinciding with this year’s LIV (54th) Super Bowl. This includes Larry Fitzgerald, wide receiver for the Arizona Cardinals, Jarvis Landry, wide receiver for the Cleveland Browns, and Mark Sanchez, broadcaster and retired NFL quarterback. The campaign launched with an official music video featuring the ambassadors highlighting the issues facing coral and the steps individuals and businesses can take to help. Via a social media campaign, each will make a Super Coral Play – a simple action or pledge to help reduce negative impacts on the environment and their personal carbon footprint to help coral, and to encourage others to make their own contribution. Once individuals or businesses have chosen their “play,” participants are encouraged to express it on social media with a video or using the official campaign filter, tagging #SuperCoralPlay and challenging two others.

Individuals can also get involved by purchasing a special edition Super Coral Play bracelet made of abandoned fishing nets known as ghost nets, to support the important research on Ocean Cay, to help find practical solutions for the survival of coral for future generations. MSC Foundation indicated that for every campaign bracelet purchased, a Super Coral would be propagated at the Ocean Cay marine reserve off the coast of Miami.

“At MSC, we long have committed to continuously reduce and minimize the environmental footprint of our operations also as it relates to ocean warming and coral health,” said MSC Cruises USA Chairman and Ambassador of the MSC Foundation in the Americas Rick Sasso.

“We pledged to offset as of January 1, 2020 all C02 emissions of our global cruise fleet that we cannot currently eliminate, while we continue to invest in the accelerated development of advanced environmental technology that will eventually lead us to zero emissions operations. Additionally, we have removed close to 100% of all single-use plastic across from our fleet as of 2019.

Sasso added: “We encourage other businesses and partners of MSC to take part in our campaign with one or more sustainability actions of their own. To encourage participation in this critical campaign for the environmental health of our region, participating consumers and businesses sharing #SuperCoralPlay have the opportunity to win prizes such as free cruises to our own Ocean Cay MSC Marine Reserve and more.”

During the week leading up to the big game, fans are invited to visit the Ocean Cay MSC Marine Reserve installation at Super Bowl LIVE’s Environmental Village from Jan. 25 – Feb. 1, to learn more about the Super Coral Play campaign. This experiential space will showcase the work being done on Ocean Cay as well as offer an interactive experience. In addition, between now and Super Bowl LIV on Feb. 2, 2020, participants sharing #SuperCoralPlay on social media will be entered to win a prize. More details can be found at SuperCoralPlay.org.