MSC Mediterranean Shipping Company through its freight operator Medway in Iberia, is making a significant investment in the construction of Portugal’s largest dry port to address the growing needs of exporters and shippers in the north of the country. 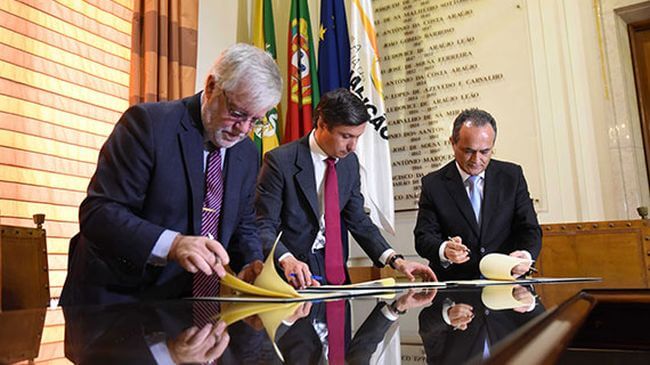 This new railway station at Lousado will serve the second largest economic region in Portugal through direct connections to the port of Sines. Northern Portugal accounts for about 39% of the national exports and 29% of the national economy and its main industries include textiles clothing, footwear and metallurgy as well as medium- and high-tech sectors such as automotive components, pharmaceuticals, machinery, precision and communication equipment and computers.

The Lousado terminal will have an estimated area of 200,000 sqm and storage capacity of 10,000 TEUs. Its six rail lines will be of a European standard of 750m each, serving 12 to 14 trains per day. It will increase the use of electric railways compared to road, and hence have a positive impact on traffic congestion and CO2 emissions, thus providing a more sustainable mode of freight transportation.

The project is proceeding with the cooperation and support of public institutions, such as the local City Hall of Famalicão and Infraestruturas de Portugal (IP). Portugal is planning major infrastructure investments to enhance rail connectivity, including 19 rail projects with a total budget of 4.1 billion euros. The new terminal at Lousado will be connected to the national rail network and the main corridors to the port of Sines, and would allow for trans-border service connecting the Iberian Peninsula to the rest of Europe.

“We are very pleased to implement this new agreement, which will lead to the construction of what will be the largest dry terminal in the Iberian Peninsula,” says Giuseppe Prudente, MSC’s Chief Logistics Officer.

Construction will begin as soon as the required licences have been approved and is expected to be operational by March 2020. The terminal will be equipped with the most modern technologies, such as state-of-the-art lifting equipment, and is estimated to create more than 90 direct and indirect new jobs.

“Using the latest-generation technology, this will be among the most modern dry terminals in the world and the answer to the logistics needs of local companies, making exports and imports easier and thus contributing to the region’s prosperity,” Giuseppe Prudente says. “At the same time, this is a demonstration of our commitment to become more efficient and sustainable, providing the service that our customers need, every day.”

Running 100 trains per day, that is equivalent to 136 trips around the world in a year, Medway has a 90% share of the Portuguese rail freight market and the dry terminal is part of a major expansion plan in Portugal. Medway also operates in Spain, where it will be making further investments.