MSC Cruises, the largest privately-owned cruise company in the world, announced today that the first of its next generation “Seaside” class of ships – set to debut in November 2017 – will be named MSC Seaside and sail year-round from Miami to the Caribbean.

In addition, MSC Cruises announced that its Miami-based cruise operations will benefit from a newly renovated and expanded dedicated berth and terminal at PortMiami – a testament to the company’s growing ambitions in the North American market and to providing guests with the best service possible.

Following the first ship’s delivery from the shipyard, MSC Seaside will make her way to Miami for MSC Cruises’ first ever christening ceremony in the U.S. to take place in late 2017.

“The Seaside class of ships is part of MSC Cruises’ $5.3 billion fleet expansion plan that will allow the company to double its capacity by 2022,” said Gianni Onorato, CEO of MSC Cruises. “Today is a very exciting day for the company as this is the first major announcement related to the company’s new builds and demonstrates our enthusiasm and long-term commitment to continuing to expand our presence in North America.”

With a gross tonnage of 154,000 tons and the ability to accommodate up to 4,140 guests at double occupancy, MSC Seaside will be the largest cruise ship ever built by Fincantieri shipyards. The ship will offer a vast range of popular itineraries from Miami to the Caribbean. 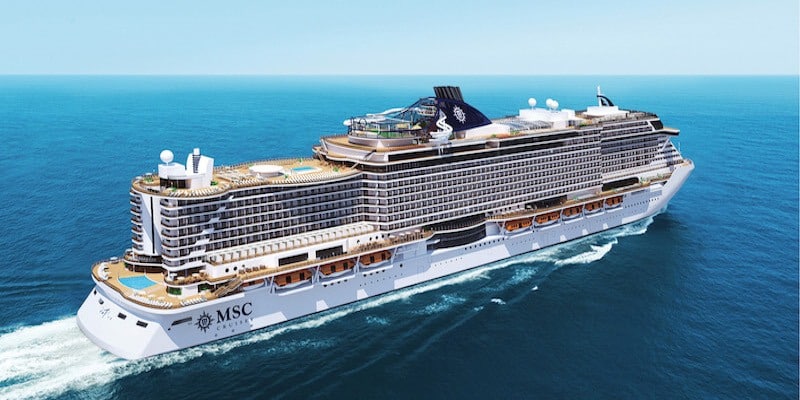 “MSC Cruises has the unique opportunity to provide North American guests with a ‘Mediterranean Style Cruise’ experience that no other line is able to offer, and guests from around the world a unique setting as it sails to the most sought-after destinations in the Caribbean” added Onorato. “Since bringing MSC Divina to Miami in November 2013, we’ve seen significant demand from consumers in the product, excellent support from our travel agent partners and the growing need for additional MSC Cruises’ ships in the market.”

As part of a first look at what MSC Seaside will offer on board, the company also unveiled that the ship will boast the most interactive and originally-designed aqua park at sea with five water slides and attractions for all ages. The park is being built by WhiteWater West Industries of Canada, the award-winning designer and manufacturer of waterpark attractions globally.

Highlights of the multi-story aqua park will include:

In an industry first, MSC will add to the thrills of traditional waterpark fun by offering guests the chance to participate in “Slideboarding™” – a unique waterslide and interactive video game all in one. Guests race down a two-story, 367 foot slide on a sleekly designed raft that includes an embedded game controller with colored buttons. The end goal – match the color of the flashing strobe lights seen on various sections of the slide with the colored buttons on the raft. The slide uses a smart gaming system that knows who riders are and tracks their progress and scores over the run down the waterslide.

In a high energy competitive setting, guests race against other guests through a combined 525 feet of twists, turns and drops, on slides that partially extend over the side of the ship and give riders a look a quick look at the sea below.

To cater to its youngest guests, a portion of MSC Seaside’s aqua park will be designed specifically for tots, featuring an active and colorful water play structure that is an experience all on its own. The AquaPlay™ area will be complete with tipping buckets, various spray cannons, solid stream jets, a raintree and a mini-slide.

In addition, various interactive AquaSpray™ activities, such as jets, falls, forts and more will be found throughout the water park for all ages to enjoy.

Directly connected to the aqua park is the Adventure Trail, a ropes course which allows guests to cross-cross between soaring towers, rope bridges, climbs, crawl-throughs and slides as they enjoy an amazing bird’s eye view of the water. Explorers on the trail will need to move quickly though as guests below will be able to use water spray cannons to soak their friends and family.

The company, which grew by 800 percent since 2004, carried 1.67 million guests in 2014 and reported strong financial results with a turnover of $1.5 billion. In addition, MSC Cruises is forecasting an additional 10 percent growth for 2015.

In 2014, as part of its $5.3 billion expansion plan, MSC Cruises ordered two ultramodern, state-of-the-art ships from Italy’s Fincantieri, world leader in cruise ship construction and one of the world’s largest shipbuilding groups, and has an option for one more ship. MSC Seaside has a planned delivery for November 2017 and the second ship in the class will be delivered May 2018.

All information believed to be accurate as of the date of issuance. It is the reader’s responsibility to verify its continued accuracy, as all information is subject to change.