Hapag-Lloyd Cruises’ 4-star expedition cruise ship, the 155-passenger MS BREMEN has become one of the first passenger ships in the world to receive the Polar Ship Certificate which will be mandatory for ships operating in the polar regions. Following a two-year long phase of intense preparation, finally the Polar Code certification has been awarded. All of the other ships in the fleet are also due to meet the requirements of the Polar Code by the Arctic season in 2018.

The International Code for Ships Operating in Polar Waters (Polar Code) – adopted by the International Maritime Organisation – contains regulations concerning the ships’ construction, equipment and training and their crews that intend to operate in the polar regions. Issued by the classification society DNV GL, the Polar Ship Certificate confirming compliance with the Polar Code will be mandatory for all ships from January 2018. The Polar Code is intended to increase the safety of ships and pay greater attention to environmental protection. 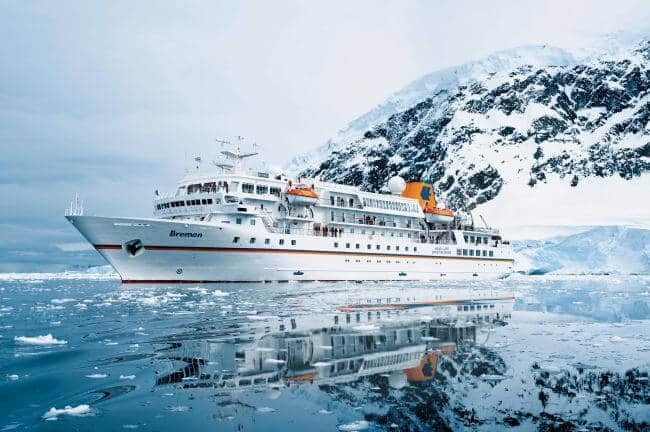 “The Polar Code will improve the safety of navigation in polar waters significantly. We have taken a pioneering step in certifying the BREMEN and paved the way for the other ships in the fleet of Hapag-Lloyd Cruises to comply with the Polar Code. I am happy to have contributed”, says Captain Thilo Natke, who oversaw the certification process for Hapag-Lloyd Cruises. Natke prepared a Polar Water Operational Manual that will, in particular, familiarise younger officers with the ship-specific particularities of navigating in ice.

Certain technical modifications have to be carried out on board the ships in order for them to meet the requirements of the Polar Code. For instance, fire lines located on deck were fitted with additional insulation and an additional ice spotlight was installed when the BREMEN was in dock in October 2016. A wide range of extra equipment has also been sourced in order to ensure the survival of passengers and crew members in potential emergencies in the polar regions. During 2017, as part of their routine dry-dock periods in the shipyard, the other ships in the Hapag-Lloyd Cruises’ fleet will also be brought in line with the criteria of the certificate in order that they meet the requirements of the Polar Code at the latest by the Arctic season in 2018 and are able to operate in the regions successfully.

BREMEN will be operating three international cruises during the 2018/2019 season, including sailing to the North East Passage in the Summer of 2018.