You are here: Home › Shipping News › MPHRP Asks Cinema Goers to Remember that Captain Phillips is Based on a ‘Real Story’
TwitterFacebookLinkedInPinterestBuffer

We know that it is Hollywood, but as the new blockbuster, Captain Phillips, premieres around the globe, MPHRP asks movie goers to remember that it is based on a true story involving real life seafarers.

Captain Phillips, which stars Tom Hanks in the title role, retells the story of the kidnapping by Somali pirates of the US-flagged containership Maersk Alabama. For nearly 4800 seafarers there has been no rescue, but months and even years at the hands of the Somali pirates who were sometime ruthless in their treatment of seafarers in the mistaken view that it made negotiations quicker.

Roy Paul, Programme Director of MPHRP, asks that people watching the film also should be aware that there are real ‘Mrs Phillips’ – seafarers’ wives and mothers of 64 seafarers who are still being held in Somalia by the pirates. He said, “These seafarers from India, Bangladesh, Philippines, Iran, Taiwan, Thailand, Indonesia, China and Sri Lanka have been held for many months, in fact in one case nearly 3 years. They cannot be rescued by special naval forces as the risk is too great. In the film the rescue works, but MPHRP is also supporting widows of seafarers who died when navies attempted to ‘rescue’ the vessel, with crewmembers suffering the trauma of being used as human shields while the ‘rescuers’ continued firing, killing crewmembers. 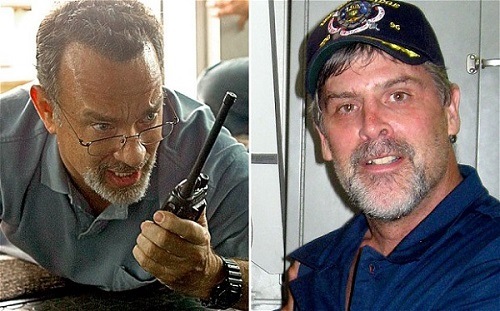 The remaining seafarers in Somalia are now all being held on land as the vessels they were captured on have all either sunk or been beached. With the loss of the vessel the owners have simply walked away as they have no money pay any ransoms and no interest in releasing their seafarers”. These owners are not mainstream quality companies like Maersk who respond to piracy situations professionally. The majority of the seafarers who are left were working for single vessel owners who see shipping as a way to make money quickly, usually by exploiting the seafarers. The seafarers were not employed through their country’s shipping departments, and are not members of maritime unions which would have given them some protection and support. They got their jobs, mostly for very small salaries of around $350 a month, through friends of friends or they paid fixers to get them the positions on board. With the ‘tourist’ tickets they went off to join the ships which has sadly turned into years of being held hostage.

Now the real seafarers’ wives and families are bombarded with calls from pirates threatening the lives of their loved ones and demanding they pay a ransom. Roy Paul says, “I have visited most of the wives, mothers, fathers and families of these seafarers and they are all poor people and cannot raise this money. I met the mother of a Thai fisherman who hasn’t heard from her son for 15 months, she is in her 80s, living in the Thai countryside and her family make a few dollars each week collecting crops. Now with the recent floods in the area they have lost that income also. Her plea to me was to bring home her son before she dies”.

Working with the UN Hostage Release Programme the task at the moment is to convince the pirates that there is no one who can, or will, pay the ransom. Roy Paul adds, “In reality for these owners the value is in the vessel, not the crew. Now their vessels have gone they are not interested in releasing the crewmembers mainly because once their vessels sank then so did any wealth they had. There are no benefactors out there willing to help and so the pirates should release these people on humanitarian grounds”.

The Maritime Piracy Humanitarian Response Programme (“MPHRP”) is a pan-industry alliance of ship owners, managers, manning agents, insurers and welfare associations working together with one aim, namely:
“to assist seafarers and their families with the humanitarian aspects of a traumatic incident caused by a piracy attack, armed robbery or being taken hostage”

ITF Assisting Seafarers Stuck On Global Cruise Vessels To Return Home From UK
Want to share your tips and advice? Got questions? Visit the community forum to ask questions, get answers, meet people, and share your tips!