The S. Rajaratnam School of International Studies (RSIS) and the Maritime and Port Authority of Singapore (MPA) have appointed former Secretary-General of the International Maritime Organization (IMO), Mr Koji Sekimizu, as a RSIS-MPA Distinguished Visiting Fellow for a period of two years commencing on 1 May 2016. The fellowship was established by RSIS and MPA to engage eminent maritime personalities with specialised knowledge, expertise and international experience.

Mr Koji Sekimizu, a naval architect by training, began his career as a ship inspector with Japan’s Ministry of Transport and joined the IMO as Technical Officer in the Sub-Division for Technology, Maritime Safety Division in 1989. During his 26 years of service, he held a number of appointments within the IMO Secretariat, including Director of the Marine Environment Division and Director of the Maritime Safety Division. Mr Sekimizu was appointed as the Secretary-General of the IMO from 2012 to 2015 and during this term, he was also Chancellor of the World Maritime University. 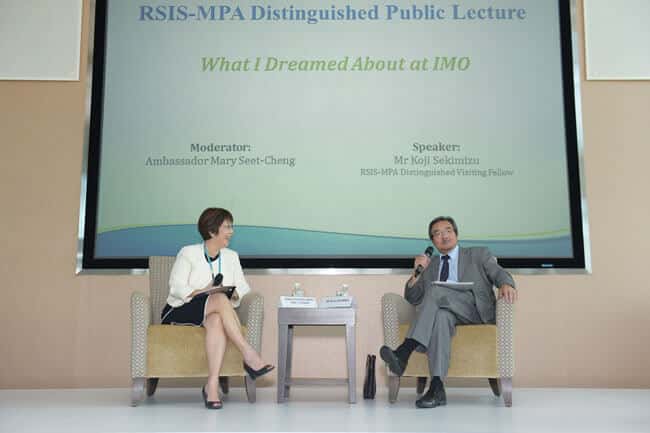 Among Mr Sekimizu’s important contributions were the development of several key conventions and initiatives on maritime safety, security, anti-piracy and sustainable shipping. He played a key role in the “Protection of Vital Shipping Lanes” initiative which culminated in the launch of the Co-operative Mechanism for Safety of Navigation and Environmental Protection in the Straits of Malacca and Singapore in 2007, and the conceptualisation of the Marine Electronic Highway initiative, another pillar of Straits cooperation.

As a RSIS-MPA Distinguished Visiting Fellow, Mr Koji Sekimizu will be invited to deliver public lectures and seminars organised by RSIS and the MPA Academy. MPA Academy will tap his vast experience to lecture at the Academy’s flagship programmes such as the Advanced Maritime Leaders’ Programme and speak at key events during the annual Singapore Maritime Week – a leading international maritime event held in Singapore. In addition, Mr Koji Sekimizu could undertake research and write policy commentaries for RSIS on international affairs and environmental issues.

In conjunction with his first visit to Singapore as a Distinguished Visiting Fellow, Mr Koji Sekimizu delivered his inaugural lecture today. Jointly organised by RSIS and the MPA Academy, his lecture titled “What I dreamed about at IMO”, was attended by close to 150 maritime industry leaders, government officials and academics. In his lecture, Mr Koji Sekimizu shared about his experiences at the IMO, his aspirations and his hopes for the future of the organization. Ambassador Mary Seet-Cheng, who is Singapore’s IMO Maritime Ambassador, was the moderator at the lecture.

Singapore To Provide Financial Support Of $27M For Maritime Companies, Individuals And Seafarers