Nobody has ever been able to calculate the amount of oil trapped in wrecks beneath the sea but we know it is there. This is because every so often a slick of raw crude or more refined bunker fuel appears on the ocean’s surface and drifts ashore where it smothers beaches and wildlife. Now, for the first time, a piece of practical technology has been developed at the design hot shop of Miko Marine in Norway that provides a fast and economically deployed tool with the ability to prevent pollution by enabling trapped oil to be recovered before it has a chance to escape and cause damage.

Whenever a ship sinks it takes its pollutants with it. Unless they have been liberated by the damage caused by the collision or the grounding, its fuel or its cargo will remain secure within the ship’s tanks. The cargo might be crude oil or any of the hundreds of different liquids transported by sea. Petrochemicals, palm oil even orange juice can find a resting place on the seabed where it is hoped that they will remain. Unfortunately rusted tanks or movement of the wreck can release the trapped liquid at any time. Many of the thousands of ships sunk during the Second World War have seventy years of corrosion eating at their plates and the days when the pollutants that they are carrying are released draw inexorably closer. The only answers are to either seal the wreck or recover the liquid in a controlled manner. 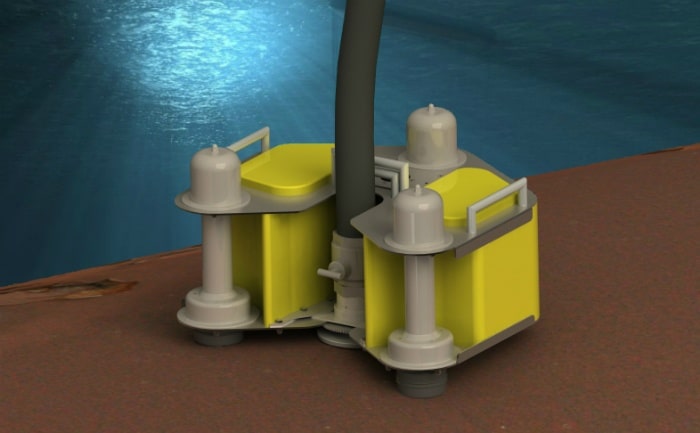 In 2012 Miko Marine launched its Moskito research and development project. This quickly attracted much interest from the Norwegian Coastal Administration (NCA) which had been grappling with the same problem of pollution caused by such leaks. The NCA decided to support Miko Marine’s quest to find a solution and the two organisations joined forces with the backing of Innovation Norway, a government-sponsored research and development organisation.

Miko already enjoyed a close working relationship with the NCA which had become a customer for some of the company’s most innovative products. Although Miko’s corporate origins lie in the world of ocean salvage, it has earned a reputation for original thinking in other disciplines. A team of highly qualified young designers have repeatedly found solutions to thorny problems by lateral thinking and innovation that is not tied to any particular technology. This is how they have successfully developed a range of magnetic patches that can be used to quickly seal a hole torn in a ship’s hull. With their later invention of the ShipArrestor they have solved the problem of drifting ships by developing a parachute-shaped sea anchor that can be delivered by a helicopter. Instead of rolling helplessly until it breaks up or runs aground, a ship without engine power or crew to operate it can now be intercepted by the ShipArrestor and its drift slowed until a tug is able to reach it and tow it to safety.

It was this combination of engineering skill and original thought that led to the development of the Moskito oil removal system. Its name was the inevitable consequence of its working similarity to the unpopular insect. Just like the insect it has to be light, versatile and adaptable because when a ship settles on the seabed there is no knowing how its tanks will come to rest. However, with a visual inspection and by studying the plans of the vessel a means of attack can be found. The Moskito is then delivered to the outside of the tank where it penetrates its skin and inserts its proboscis so that the liquid inside can sucked out. The insect allusion falls short of the engineering reality but the principle is the same and measuring just 65 cm (25 inches) by 45 cm (17 inches) and weighing only 80 kg, the tool has an insect’s light touch by subsea engineering standards.

The Moskito achieves its task through being a triumph of precision engineering and clever design. It can be deployed by divers or by an ROV (Remotely Operated Vehicle) to any ocean depth where they plant its three powerful magnetic feet against the steel hull. A 75 mm (3-inch) diameter electrically powered tank cutter drill is then activated by an operator on the surface who will be controlling the procedure through a dual video link. The Moskito’s drill then pierces steel tank walls which may be up to 40 mm (1.5 inches) thick. Once the cutter has pierced the tank, the cut disc falls away inside and is followed into the tank by a patented spring latch coupling. This then automatically connects and locks a hose to the tank without allowing any of its contents to escape. With the hose securely connected a subsea pump can be activated which extracts the oil at the rate of 12 cubic metres per hour and sends it to the surface for safe and non-polluting recovery. If it becomes necessary to relocate the Moskito it can be easily repositioned by a diver or by ROV without it being returned to the surface. Being such a compact device it is also easy to use multiple units close together if a higher rate of extraction is required.

Commenting on the potential of the Moskito, Nicolai Michelsen, general manager of Miko Marine was pleased to summarise the success of his company’s development programme. “This was not an easy product to develop as it required us to call upon our highest standards of engineering and innovation. We are, however, very pleased with the end result which has a practical versatility that will make a valuable contribution to marine environmental conservation. It provides a solution to a problem that has remained unanswered since the first ship sank and we are now hoping that our coastlines and our wildlife will see the benefit.”

How to Avoid Oil Pollution From Ships?

Different Types of Dispersants Used in an Oil Spill