Vessel operating costs are expected to rise in both 2015 and 2016, according to the latest survey by international accountant and shipping consultant Moore Stephens. Crew wages, repairs and maintenance, and drydocking are the cost categories likely to increase most significantly over that period.

The survey is based on responses from key players in the international shipping industry, predominantly shipowners and managers in Europe and Asia. Those responses revealed that vessel operating costs are expected to rise by 2.8% in 2015 and by 3.1% in 2016. 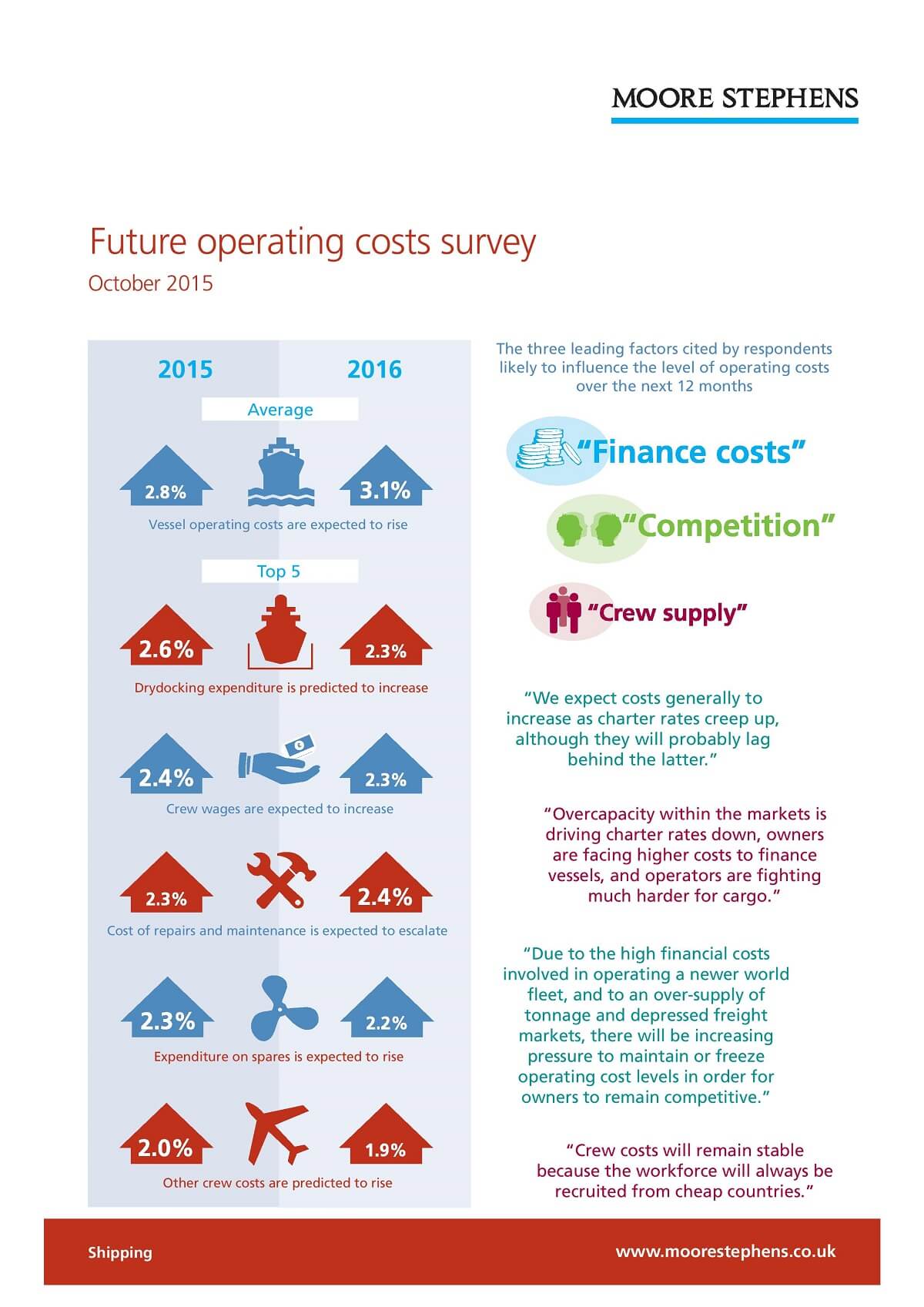 The predicted overall cost increases for 2015 were highest in the offshore sector, where they averaged 3.4% against the overall survey increase of 2.8%. For 2016, it was the tanker sector which was predicted to experience the highest level of increases – 3.4% compared to the overall survey average of 3.1%. The container ship sector, meanwhile, was not far behind at 3.3%.

One respondent said, “We expect costs generally to increase as charter rates creep up, although they will probably lag behind the latter. With charter rates generally low at present, the provision of services to the shipping industry needs to remain competitive, with suppliers reluctant to put up charges too soon for fear of losing business.”

Elsewhere it was noted, “Future operating costs will increase exponentially due to innumerable new regulations, the low competence of seafarers, the high bargaining power of the oil majors, stricter rules regarding maintenance and repairs carried out in ports, the advent of more sophisticated onboard machinery, and increasing consolidation in the marine equipment and services sector, resulting in more bargaining power for fewer, larger companies.”

Another respondent highlighted the fact that ship managers are under increasing pressure, pointing out, “Overcapacity within the markets is driving charter rates down, owners are facing higher costs to finance vessels, and operators are fighting much harder for cargo. Ship managers are now required to look after much more for the same management fees.”

Another still emphasised, “Due to the high financial costs involved in operating a newer world fleet, and to an over-supply of tonnage and depressed freight markets, there will be increasing pressure to maintain or freeze operating cost levels in order for owners to remain competitive. This is likely to change between 2017 and 2020, however, with significant capital expenditure required for regulatory compliance.”

One respondent predicted, “Crew costs will continue to be the main area of increased operating expenditure,” a sentiment echoed by another, who referenced the effect of the Maritime Labour Convention 2006 in this regard to support this supposition. Elsewhere, however, it was noted, “Crew costs will remain stable because the workforce will always be recruited from cheap countries.”

‘Staggering’ cost increases due to redundancy in electronic navigation and communication equipment, and increased port dues, were among other issues deemed by respondents in the survey to be likely to result in an increase in operating costs.

Moore Stephens also asked respondents to identify the three factors that were most likely to influence the level of vessel operating costs over the next 12 months. Overall, the most significant factors identified by respondents were finance costs at 22% (compared to 21% in last year’s survey) and competition also at 22% (up from 18% last time). Crew supply was in third place with 17% (down 3 percentage points on last time), followed by demand trends (down by one percentage point to 16%) and labour costs, unchanged at 13%. The cost of raw materials was cited by 8% of respondents (compared to 10% in last year’s survey) as a factor that would account for an increase in operating costs.

Moore Stephens shipping partner Richard Greiner says, “The predicted increases in ship operating costs for this year and next compare to an average fall in 2014 of 0.8% in operating costs across all main ship types recorded in the recent Moore Stephens OpCost report. Nevertheless, the level of increases anticipated for 2015 and 2016 are low in comparison with many we have witnessed in recent years. Shipping has seen much worse, and prevailed. For example, many of the companies which endured a 16% rise in operating costs in 2008 are still operating successfully today.

“It is no surprise that crew wages feature near the top of the predicted operating cost increases for both 2015 and 2016, not least because of the entry into force of the Maritime Labour Convention 2006, which mandates the manner in which seafarers must be paid. For shipping, as for every industry, investment in good people will always be money well spent.

“Expenditure on repairs and maintenance, meanwhile, is expected to increase over the two-year period by the same aggregate amount as crew wages. Again, this is not a surprise. According to OpCost, repairs and maintenance expenditure was marginally down in 2014 on the previous year, attributable in part to world steel prices dropping to their lowest level in a decade during 2014/2015 and to disappointing freight rates. But things are likely to change. Steel prices are predicted to rise steadily over the next four years, there are realistic prospects of an improvement in the freight markets, and regulatory requirements are set to bite even harder. All these developments are likely to increase the industry’s repair and maintenance bill and will doubtless impact, also, on drydocking costs, which are predicted to be the subject of some of the biggest increases in 2015 and 2016. Lube costs are also set to increase in 2016 on the back of recovering oil prices.

“In addition to traditional operating costs, the level of which can generally be predicted to a certain degree, shipping has other potential costs hanging over its head which are more difficult to budget . For example, ratification of the Ballast Water Management Convention has seemingly stalled at the finish line. It has more than enough signatories, but still needs slightly more than an additional 2% in terms of tonnage to get itself on the books. Whilst the ratification is tardy, nobody doubts that it will cost owners and operators a lot of money once the convention enters into force.

“Meanwhile, a government spokesman for the Marshall Islands recently characterised the IMO secretary-general as a ‘danger to the planet’ for his alleged failure to endorse more stringent curbs on the shipping industry’s CO2 emissions. This is what Sherlock Holmes might have described as a ‘three-pipe problem’ – politics, gas and competition. It is not an unusual combination in shipping. In the end, however, it is likely to have an impact on the industry’s operating costs, and there is no accounting for that.”