Mitsui O.S.K. Lines, Ltd. today announced plans to assist the non-profit organization South Africa Primary Education Support Initiative(*) (Sapesi-Japan) with the ocean transport of mobile library vehicles to the Republic of South Africa. This marks the sixth time since 2009 that MOL has contributed to this initiative.

MOL previously transported 45 vehicles, and in this phase, it is transporting three more, donated from all over Japan. Those three will be transported by the MOL car carrier Neptune Ace in the end of December, and are scheduled to arrive at the Port of Durban in January. 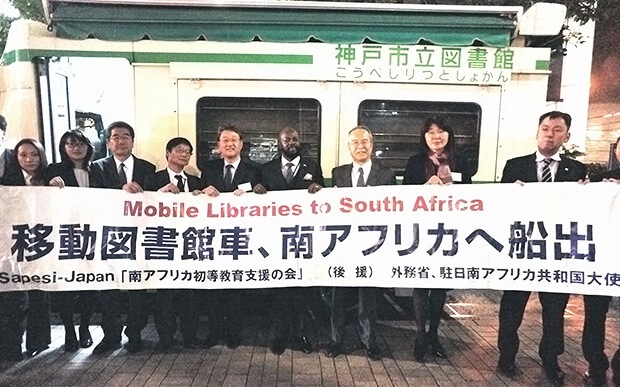 On November 28, a ceremony marking the transport of the mobile library vehicles was held at the South African Embassy in Tokyo, with participants including His Excellency Thulani Dlomo, Ambassador of South Africa to Japan and MOL Managing Executive Officer, Naotoshi Omoto. The mobile libraries that played an important role in local communities in Japan will soon gain new lives in South Africa, through visiting dotted elementary and junior high schools that have no school library, and will contribute to enhancing the education activities.

MOL takes a proactive approach to social contribution activities that make use of its unique characteristics as an ocean transport company with a global network.