Mitsui O.S.K. Lines, Ltd. announced the company held a commendation ceremony for “MOL Presidential Award to the Officers and Engineers 2015” on December 11.

The awards are intended to recognize the ongoing safety-related contributions of the MOL Group crewmembers while inspiring the next generation of leaders. The recipients share a commitment to education and training of junior fellows, an exemplary attitude, and years of success ensuring the safety of the MOL Group fleet. The ceremony has been held every year since 2008, and 60 dedicated mariners to date have received the awards. 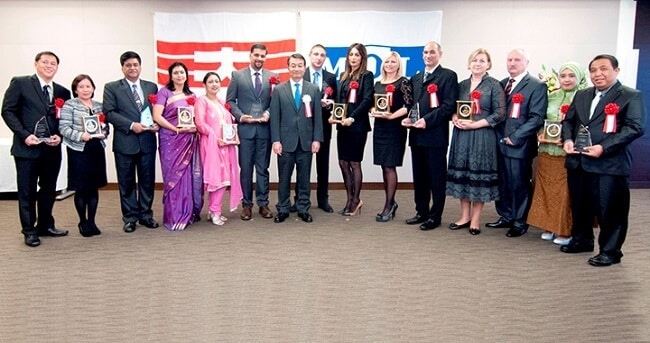 This year’s ceremony honored a total of seven officers and engineers. Awards for 2015 went to seafarers from the Philippines, India, Indonesia, Croatia, and Ukraine, and also one 2014 recipient who was on board at the time of last year’s ceremony was attended. They received commemorative plaques and extra prizes from MOL President & CEO Junichiro Ikeda, who expressed gratitude to their contributions to safe operation over the years, and urged them to inspire younger crewmembers toward similar success.

MOL strives to improve safety awareness and cultivate the world’s most highly skilled seafarers as it forges ahead to become the world leader in safe operation.