Mitsui O.S.K. Lines, Ltd. on April 6th, announced that, DNVGL issued an Approval In Principle (AIP) to MOL and Samsung Heavy Industries, Co., Ltd. for the future design of a series of four LNG-powered 20,000 TEU containerships, which have been under construction.

MOL signed a deal for the series of containerships with SHI in 2015. The ships were designed in anticipation of using LNG as a fuel, in light of more stringent environmental regulations that will take effect in the years to come. At the construction stage, MOL and SHI developed a basic plan targeting vessels in service, performance evaluation, compliance with new regulations, and risk assessment (Hazard Identification Study (HAZID)) in a joint study, and completed the basic design in March. 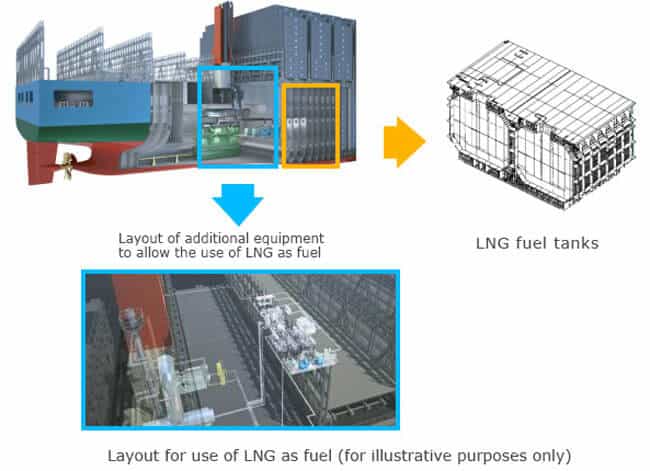 Global regulations on exhaust emissions from merchant vessels, not only by the International Maritime Organization (IMO) and other specialized international bodies, but also by countries all over the world are becoming tighter. MOL have proceeded studies on the use of LNG fuel in light of growing demand for next-generation clean fuels to replace conventional heavy fuel oil, because LNG can significantly reduce emissions of CO2, a major contributor to global warming, as well as NOX and SOX, which cause acid rain and other problems.

LNG bunkering system for the vessels has not been established yet, but is expected in the near future as studies on the use of LNG as a clean, environmentally friendly fuel are underway around the world.

MOL positions this series of vessels as its environmentally advanced next-generation ships. The first vessel of the series, the MOL Triumph, was delivered on March 27, which can be converted to run on LNG fuel when the LNG supply is commercially completed in the future.