Mitsubishi Shipbuilding Co., Ltd., a part of Mitsubishi Heavy Industries (MHI) Group, in collaboration with Shin Nihonkai Ferry Co., Ltd., has successfully applied for grant aid under the “Joint Technological Development Programme for the Demonstration of Unmanned Ships” sponsored by The Nippon Foundation.

With this support, the two companies will commence the co-development of underlying technologies and systems to enable unmanned ship navigation in the future. The resulting prototype system will be installed on a vessel to be operated by Shin Nihonkai Ferry and undergo verification via demonstration testing in Japanese coastal waters.

Once the development phase has been completed, the prototype unmanned navigation system will be installed in a large high-speed car ferry ordered by Shin Nihonkai Ferry, to be built at the Tategami Main Plant of MHI’s Nagasaki Shipyard & Machinery Works. Demonstration testing of the new system will be performed for approximately one year, starting from ship delivery scheduled for end-June 2021 through May 2022. During this phase, crew will be on board to monitor operations and ensure safety. 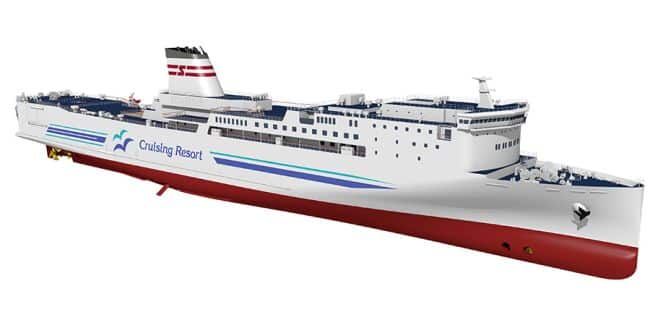 Mitsubishi Shipbuilding has been developing automation systems to assist ship navigation and cargo handling since the 1990s. Under the new development program, the company will collaborate not only with Shin Nihonkai Ferry but also with academic institutions, IT businesses and control system engineering firms in the design, construction and total verification of a large car ferry which integrates advanced unmanned navigation technologies.

Going forward, Mitsubishi Shipbuilding will expand on the achievements of its current development program to further enhance ship safety, reduce the crew’s workload, and trim operating costs. By resolving such issues, the company will contribute to the ongoing development of marine logistics and ocean transportation.

The consortium constituted by Marubeni Corporation (“Marubeni”), Tryangle Inc. (“Tryangle”), Mitsui E&S Shipbuilding Co., Ltd. (“Mitsui E&S Shipbuilding”) and the City of Yokosuka applied to and secured a place in the “Joint Technological Development Programme for the Demonstration of Unmanned Ships” led by The Nippon Foundation. The consortium is to launch a pilot project with an aim to establish the technology for autonomous ship operation in Yokosuka City

(hereinafter, “The Proof of Concept”) with the financial support awarded by The Nippon Foundation.

Currently, Japanese coastal trade is facing issues resulting from its aging population and a declining number of ship crew engaged in the industry. Under these circumstances, autonomous ships are expected to reduce the workload of the ship crew while enhancing operational safety. Unmanned ships will contribute to secure, safe and stable sea transport in Japan; for instance, the technology is expected to play a significant role in transporting necessary goods should Japan experience a natural disaster.

In collaboration with The Nippon Foundation, Marubeni, Tryangle, Mitsui E&S Shipbuilding, and the City of Yokosuka will establish autonomous ship technology through this pilot project, towards the goals of providing solutions to the shipping industry and achieving a safe and sustainable society.

(*) The ship crew will be standing by onboard to ensure the security of the operation.

Leading the consortium as a project manager by monitoring the schedule of the project as well as issues arising during the pilot project. After the completion of the Proof of Concept, Marubeni will try to commercialize the business of autonomous ships domestically as well as internationally.

The owner and operator of the ship to be used for the Proof of Concept, supporting the autonomous operation of the vessel retro-fitted with the technology.

Developing and providing key elements including autonomous ship technology and automated berthing technologies. Developing retro-fittable technology for a small craft, which tends to be difficult to maneuver precisely.

Providing administrative support under the framework of the “Yokosuka × Smart Mobility Challenge” – the collective initiatives to solve local issues through collaboration among the public, academic and private sectors.