Mitsubishi Shipbuilding Co., Ltd., a Group company of Mitsubishi Heavy Industries, Ltd. (MHI) based in Yokohama, held a christening ceremony on February 21 for the next-generation LNG (liquefied natural gas) carrier currently under construction for Mitsui & Co., Ltd. The new ship, named MARVEL CRANE, is a state-of-the-art LNG carrier with a design that significantly improves both LNG carrying capacity and fuel performance due to the adoption of a more efficient hull structure and hybrid propulsion system. Completion is scheduled for March 2019, after which the MARVEL CRANE will be put into service, transporting LNG for the Cameron LNG Project in the U.S., in which Mitsui & Co. is participating. 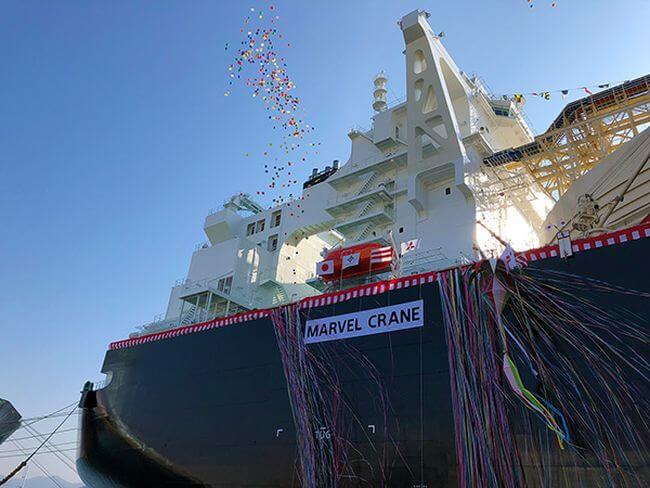 The christening ceremony, held at the Koyagi Plant of MHI’s Nagasaki Shipyard & Machinery Works, was attended by many people involved with the project. Mitsui & Co., Ltd. Counselor Hiroyuki Kato announced the name of the ship, while his wife performed the ceremonial rope cutting.

Mitsubishi Shipbuilding received the order for the new vessel through MI LNG Company, Limited, a joint venture for the design and sale of LNG carriers established by MHI and Imabari Shipbuilding Co., Ltd. Construction was managed by Mitsubishi Heavy Industries Marine Structure Co., Ltd., an MHI Group company based in Nagasaki. The launching took place on August 3, 2018. Mitsui & Co., Ltd. named its LNG carriers for the Cameron LNG Project “MARVEL” and “CRANE,” after the migratory bird. 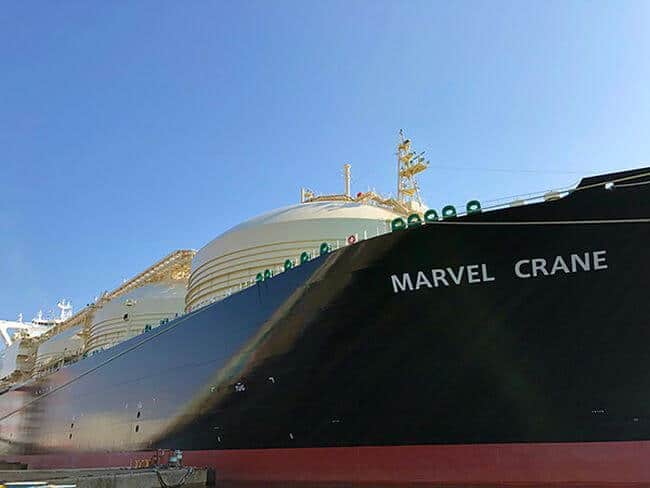 The vessel is equipped with a modified version of the highly reliable Moss(Note) spherical tank, an apple-shaped tank with a protruding upper half. This tank design effectively expands the ship’s LNG carrying capacity without increasing its width, allowing it to pass through the new Panama Canal. The propulsion system is a hybrid 2-shaft STaGE (Steam Turbine and Gas Engines) system combining a steam turbine and a gas-fired engine. The ship is equipped with MHI’s proprietary high-efficiency reheat marine steam turbine engine, or UST (MHI Ultra Steam Turbine Plant), a dual-fuel engine power generator that’s able to burn both natural gas and diesel, as well as an electric propulsion engine. Effective utilization of waste heat by the UST provides a substantial improvement in plant efficiency, allowing for high-efficiency navigation at both low and high speeds.