Mitsubishi Shipbuilding Co., Ltd., a Group company of Mitsubishi Heavy Industries, Ltd. (MHI) based in Yokohama, held a christening and launch ceremony on November 27 for a cargo-passenger ship currently under construction for Tokai Kisen Co., Ltd.

The new vessel will inherit the name SALVIA MARU, replacing the second ship bearing the name that is currently operated by the company. The handover is scheduled for June 2020 upon completion of rigging work, after which the vessel will enter service on a regular route connecting Tokyo with the Tokyo Islands(Note) of Oshima, Toshima, Niijima, Shikineshima, and Kouzushima, as well as for operating the “Tokyo Bay Night Cruise” during the summer season.

The well-attended ceremony was held at the Enoura Plant at MHI’s Shimonoseki Shipyard & Machinery Works in Yamaguchi Prefecture. The formal christening was conducted by Tokai Kisen President Junichi Yamazaki, with a ceremonial rope cutting by the fourth Tokai Kisen Mascot Girl, Natsumi Koike. 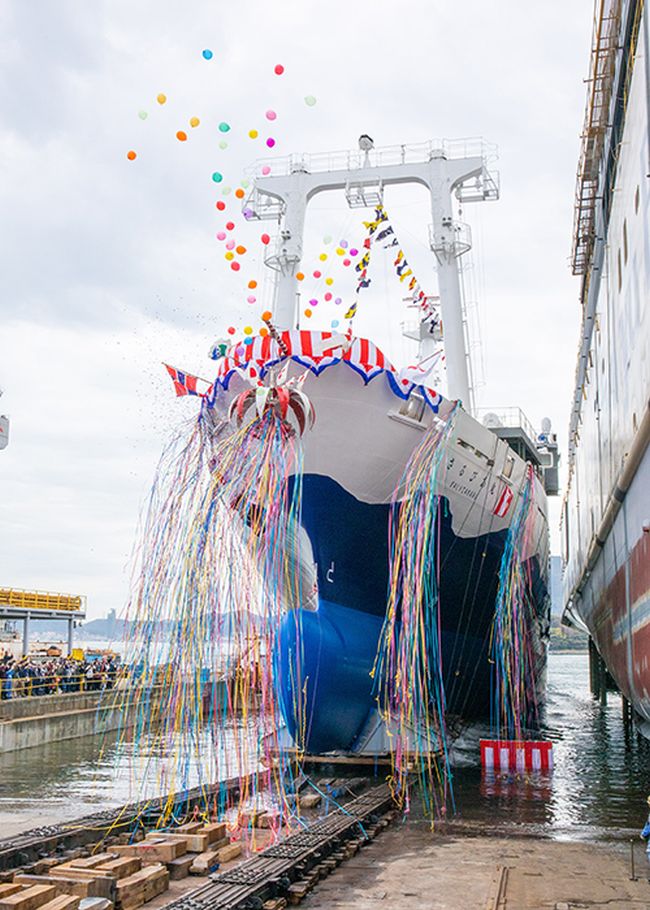 The new SALVIA MARU is a joint construction project of the Yokohama-based Japan Railway Construction, Transport and Technology Agency (JRTT), an Incorporated Administrative Agency to support the provision and maintenance of transport facilities and other infrastructure based on Japan’s transport policy.

The vessel is jointly owned by JRTT and Tokai Kisen, built by Mitsubishi Shipbuilding in accordance with a three-party contract with Mitsubishi Shipbuilding, and will be operated by Tokai Kisen. The new SALVIA MARU is 118m long and 17m wide, with gross tonnage of approximately 6,200 tonnes. It has prescribed capacity for 1,343 passengers and carrying capacity for 38 cargo containers, and is able to cruise at a speed of around 20 knots.

The vessel’s design concept is “connections,” incorporating the idea of sea voyages linking people, cities, and the mainland with islands, as well as the past with the future. A distinctive feature of the ship is the stylish hull with color control in “Tokyo Island Blue,” an azure color reflecting the island seas. 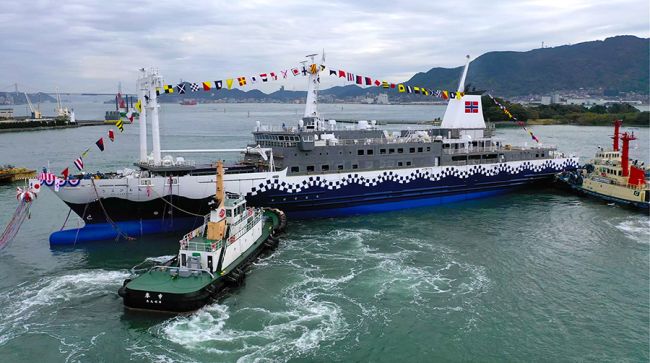 Going forward, Mitsubishi Shipbuilding will continue to construct passenger ships, cargo carriers, and transport vessels that offer superlative fuel efficiency and environmental performance and contribute to stable transport. In this way Mitsubishi Shipbuilding would work together with its customers to solve their diverse challenges while vitalizing maritime transportation and contributing to environmental protection in the global community.

The Tokyo Islands is a general term for 11 regularly inhabited islands that are part of Tokyo Prefecture, the nine regularly inhabited islands of the Izu Islands, together with Chichijima and Hahajima in the Ogasawara archipelago. The term is mainly used by organizations such as the Tokyo Islands Tourism Federation, a general incorporated association affiliated with the Tokyo Metropolitan Government.